Home > Back to Search Results > Virginia... Repeal of the British Jew Bill of 1753...
Click image to enlarge 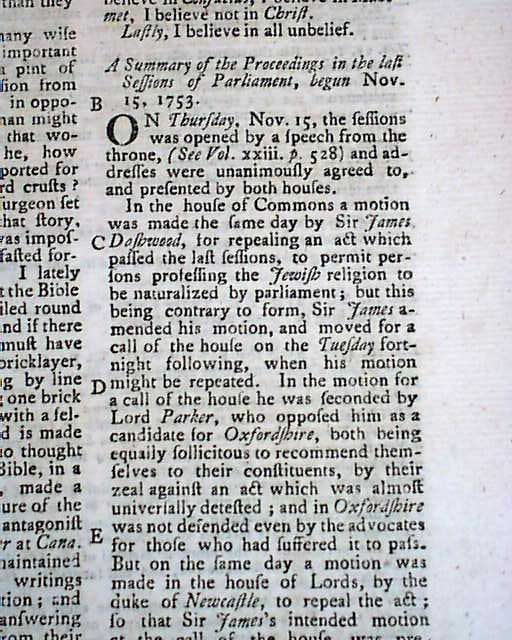 The prime content would be under the heading: "A Summary of the Proceedings in the Last Sessions of Parliament..." which reports the repeal of the famous Jew Bill of 1753. In 1753 a bill passed Parliament to allow Jews to become naturalized citizens but an uproar caused the bill to be reconsidered, as noted in this report.
A portion of the report--the entirety of which can be seen in the photos--includes: "...a motion was made...for repealing an act which passed the last sessions, to permit persons professing the Jewish religion to be naturalized by parliament; but this being contrary to form...the same day a motion was made in the house of Lords...to repeal the act...the repeal passed through both houses with such rapidity..." with more.
This magazine also has an account of the exploration of "Russian America" (present-day Alaska) which takes nearly two pages.
Yet another page has a report datelined: "Virginia, Feb. 9" concerning the British trying to get the French out of their territory.
Complete in 48 pages, full title/index page, 5 3/4 by 8 3/4 inches with wide never-trimmed margins, great condition. This issue still has two of the three plates called for, one of which is a foldout.