Home > Back to Search Results > First image of a balloon flight in any periodical? "Peter the Wild Boy"...
Click image to enlarge 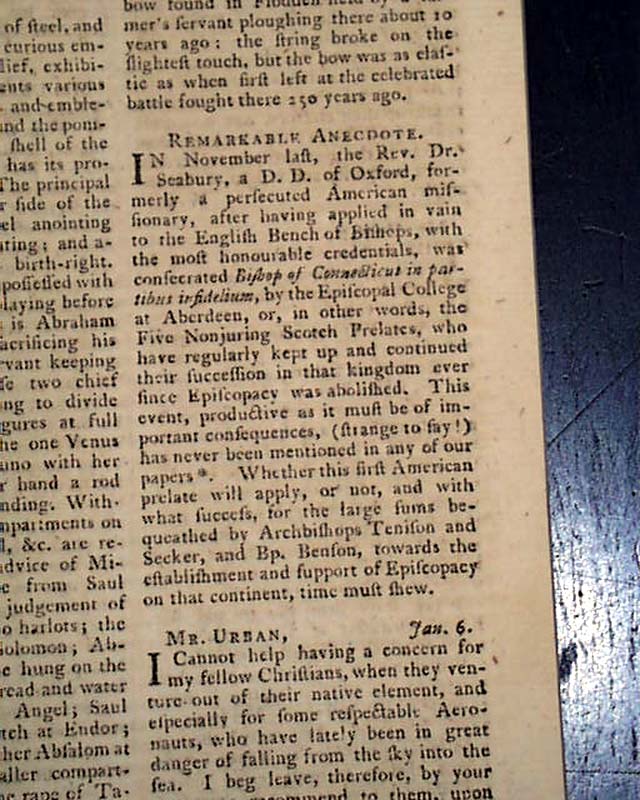 First image of a balloon flight in any periodical? "Peter the Wild Boy"...

Perhaps the most notable content is the foldout plate with various images, the largest of which is a terrific engraving of: "The Flight of M. Blanchard and Dr. Jeffries from Dover Castle" to France, as noted at the bottom of the title/contents page.  This was the very first crossing of the English Channel by balloon (see this hyperlink for more), and could well be the earliest image of any balloon flight to appear in any periodical. A related article with much detail on the flight is found in the January issue.
Included is an article which references the first American Episcopal bishop (see). There is an interesting 1 1/2 page article: "Lord Monboddo's account of Peter the Wild Boy" who was quite notable at the time. See this hyperlink for much more on him.
Near the back is much on the: "Proceedings in the Present Session of Parliament" followed by: "Foreign Intelligence" which includes: "American Intelligence". It includes a report from Richmond: "His Excellency Gen. Washington arrived in this city & was received with the most heart-felt applause...".
The other full page plate called for is lacking.
Complete in 80 pages, 5 by 8 inches full title/contents page with an engraving of St. John's Gate, slightly irregular at the blank spine, nice condition.