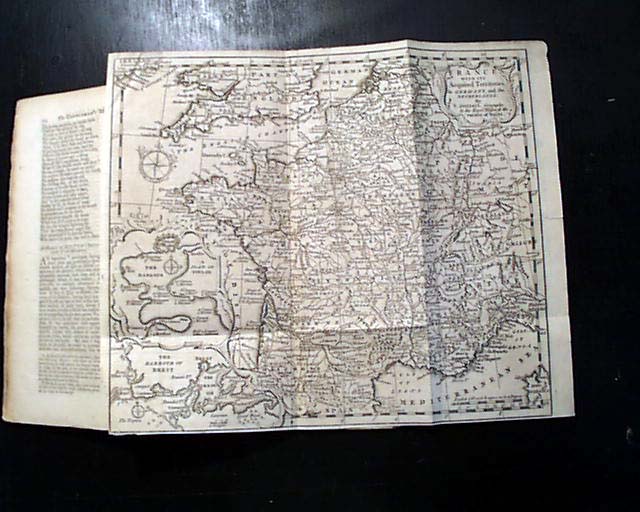 Certainly the prime feature of this issue is the very nice foldout map titled in the cartouche: "FRANCE With Its Acquired Territories In Germany, and the Netherlands..." (see). This map shows considerable detail including a close-up view of the harbor & town of Toulon. The map also shows the southern portion of England and just a bit of Corsica, Spain, and Ireland. This map folds out to measure 11 1/4 by 9 1/2 inches, is a bit irregular at the left margin but no loss, and a few discrete archival mends to the reverse not noticeable on the front. Very nice condition.
Among the articles within are: "Experiments, with some Queries, on Electricity" "Directions to Make Cyder Exceeding French Wine" "Recipe to Present Sea Sickness" "List of Ships Taken on Both Sides"  "Scheme to Tax Tickets for Plays, etc." and many more.
Near the back is the "Historical Chronicle" with various news reports of the day, including an "Extract of a Letter from Cape Breton which is in Canada (see) and some reports on the trial of Lord Lovat.  There is also: "A Description of the Town and Harbour of Louisbourgh, on the Island of Cape Breton..." which takes a full column.
Complete in 52 pages, 5 1/2 by 8 3/4 inches with wide untrimmed margins, full title/contents page with an engraving of St. John's Gate, very nice condition.