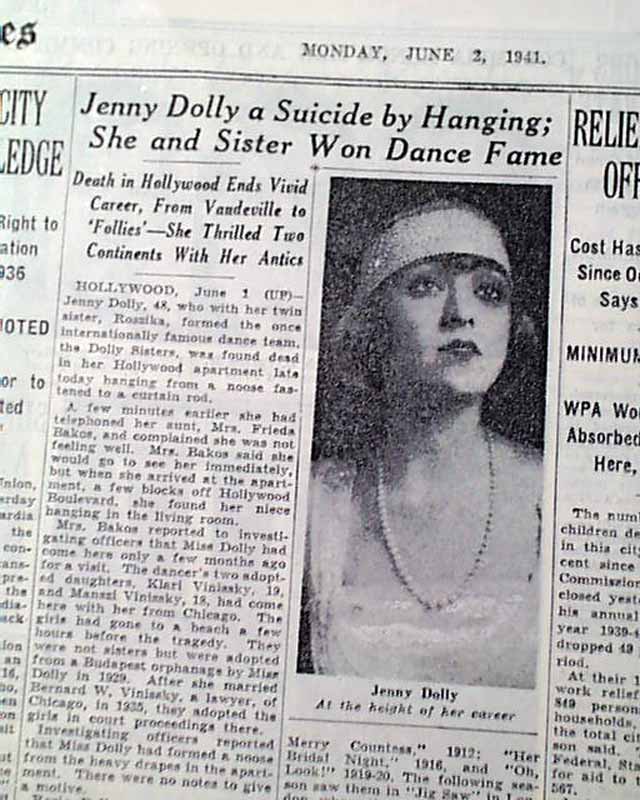 The top of page 19 has a two column heading: "Jenny Dolly a Suicide by Hanging; She and Sister Won Dance Fame" with subhead and photo. (see) First report coverage on Hungarian-American dancer and actress, Jenny Dolly, committing suicide.
Other news, sports and advertisements of the day with much on World War II. Complete in 34 pages, this is the rare rag edition that was produced on very high quality newsprint, with a high percentage of cotton & linen content, allowing the issues to remain very white & sturdy into the present. Given the subscription cost, libraries & institutions rather than individuals were the primary subscribers of these high-quality editions. Nice condition.

wikipedia notes: After a car accident, Jenny Dolly developed depression. Her depression furthered when she was forced to sell the remainder of her jewelry at auction in 1936 After living abroad for nine years, Jenny returned to the United States after her sister invited her to live with her and her husband Irving Netcher in Chicago. It was there that Jenny met Bernard Vinissky, a wealthy lawyer. They were married on June 29, 1935. Vinissky later adopted the two Hungarian war orphans, Klari (1924-2013) and Manzi (1925-1985), that Jenny adopted in 1929. The marriage did little to alleviate Jenny's depression and the couple separated. Jenny took an apartment in Hollywood with her two daughters. On June 1, 1941, she hanged herself from a curtain rod in her apartment.