Home > Back to Search Results > Cook's voyage to the Hawaiian Islands with a related print...
Click image to enlarge 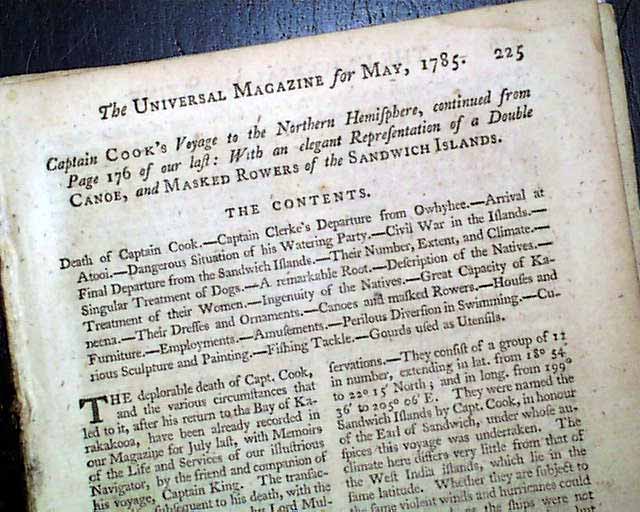 Cook's voyage to the Hawaiian Islands with a related print...

This magazine--much more scarce than the Gentleman's Magazine--published in serial form the account of: "Captain Cook's Voyage to the Northern Hemisphere...", this issue containing reports from February, 1779 when he returned to the Hawaiian Islands after his search for a Northwest Passage to the Atlantic.
As noted in "The Content" at the beginning of the front page, topics include: "Death of Captain Cook--Capt. Clerke's Departure from Owhyhee--Arrival at Atooi--Final Departure from the Sandwich Islands--Description of the Natives--Treatment of Their Women--Canoes & Masked Rowers..." and much more (see), with the very detailed text taking 6 1/2 pages. Certainly the most notable part of the text is the beginning which references the death of Captain James Cook: "The deplorable death of Capt. Cook & the various circumstances that led to it after his return to the Bay of Karakakooa..." with more (see).
Of significance is that the rare full page plate is still present, showing: "A Double Canoe of the Sandwich Islands, the Rowers Masked." now known as the Hawaiian Islands (see). The print is in very nice condition.
There is another unrelated print included here as well.
Contains 56 pages. As was typical with the Universal Magazine, it had no full title/contents page but rather an outer wrapper which served that purpose, but the wrappers were typically removed when the issues were bound. The top of the first have has the title and date. We are also including a photocopy of the volume's full title page as further verification of the title & city of publication (see). Measures 5 by 8 inches, very nice condition.