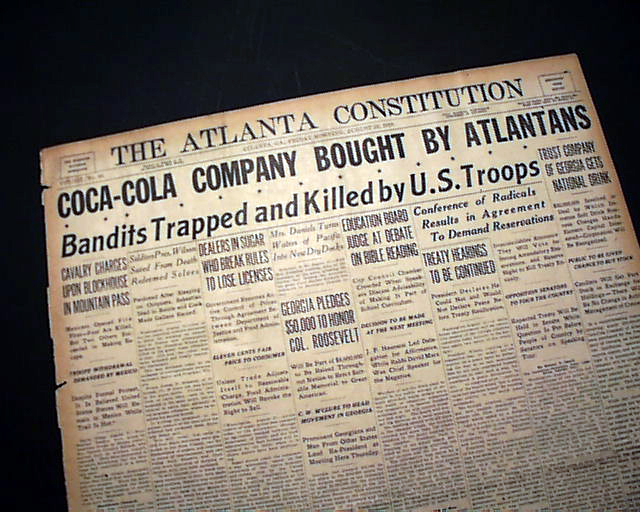 
THE ATLANTA CONSTITUTION, August 22, 1919  This issue features as a banner headline one of the more historic moments in the history of the Coca-Cola Company, when Asa Chandler, the man who bought the original formula from founder John Pemberton and propelled the company to national prominence by the 1890's, sold the company to Ernest Woodruff and an investor group for $25 million. The business was reincorporated as a Delaware corporation, and 500,000 shares of its common stock were sold publicly for $40 per share. Coca-Cola had now become a publicly traded company.
The text of the article, which provides considerable detail of the sale as known at that point, continues on an inside page (see photos).
Having been founded in Atlanta in 1886, the business continues to maintain its international headquarters in this city to this day. It is very significant to have this report in an Atlanta newspaper, and very likely that only an Atlanta newspaper would give this report such prominence.
This is the complete newspaper, light browning with little spine wear, generally very nice condition. Although likely not a unique issue, it is an extremely rare item and the first we have seen offered in our 40 years in the rare newspaper hobby.