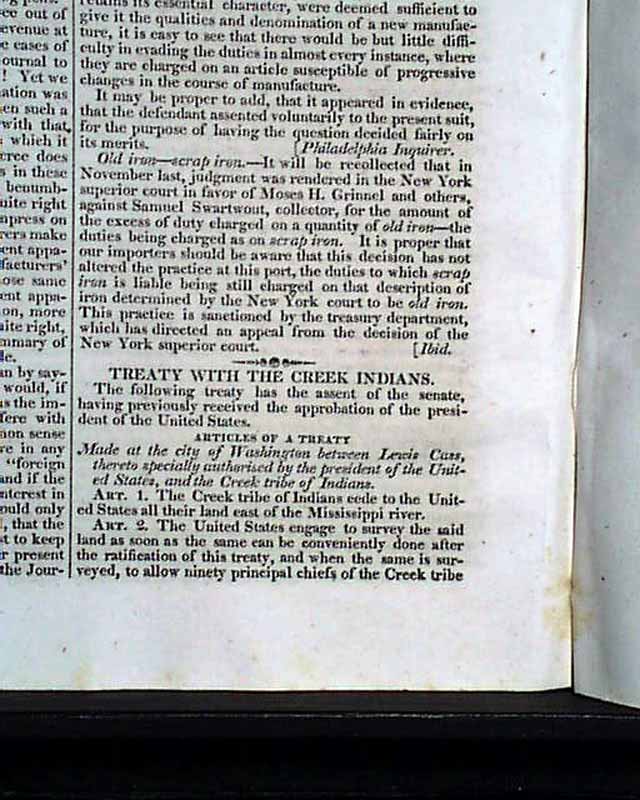 
NILES' WEEKLY REGISTER, Baltimore, April 14, 1832  Perhaps the most significant content is the full page report headed: "Treaty With The Creek Indians" which has the complete text of the Treaty of March 24, 1832 with all 14 articles followed by the signatures in type of Lewis Cass, William McGilvery, Benjamin Marshall and various Indian chiefs.
Also known as the Treaty of Cusseta, it required that the Creek nation relinquish all claims to land east of the Mississippi River, including the territory in Alabama. In return, individual Creeks were to be granted land claims in the former Creek territory. Each of the ninety Creek chiefs was to receive one square mile of land and each Creek family was to receive one half sq. mile of their choosing. Despite the land grants, the treaty made clear the intention of the US government to remove as many Creeks as possible to the West in the least amount of time.
Sixteen pages, 6 1/2 by 9 1/2 inches, some very lite foxing, otherwise in very nice condition.
This small size newspaper began in 1811 and was a prime source for national political news of the first half of the 19th century. As noted in Wikipedia, this title: "...(was) one of the most widely-circulated magazines in the United States...Devoted primarily to politics...considered an important source for the history of the period."