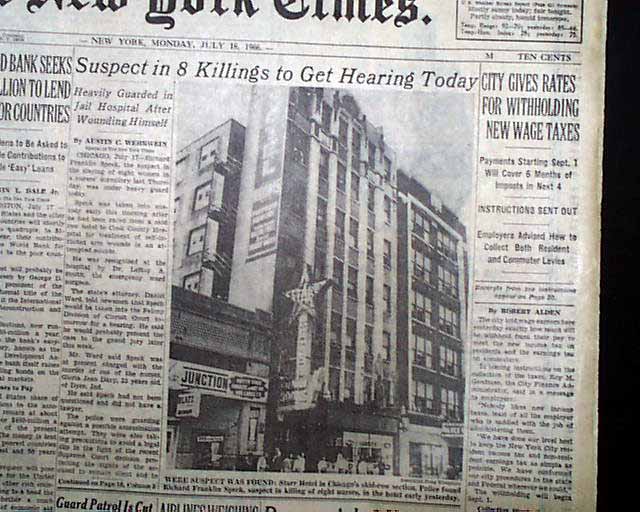 
THE NEW YORK TIMES, July 18, 1966  The front page carries a four-page headline "Suspect in 8 Killings to Get Hearing Today" with subhead "Heavily Guarded in Jail Hospital After Wounding Himself". "Richard Franklin Speck, the suspect in the slaying of eight women in a nurses' dormitory last Thursday, was under heavy guard today. Speck was taken into custody early this morning after he had been raced from a skid row hotel to Cook County Hospital for treatment of self-inflicted arm wounds in an attempted suicide... The police were guarding against a possible assassination attempt..." The article continues inside and contains a photo of the hotel is present also.
Page 16 has additional articles "Doctor Rubbed Away the Blood and Saw the Suspect's Tattoo" with subhead "'Born to Raise Hell' Marking Was Proof That Patient Was Accused Murderer"; "Suspect Has a Prison Record And Is Known as a Drifter"; "No Photos of Suspect In Slaying Permitted"; and "Suspect Is Called  A Heavy Drinker" "Dallas Neighbors Describe Him as 'Unhappy' Man".
Other news, sports and advertisements are within.
Complete in 44 pages and in very nice condition.