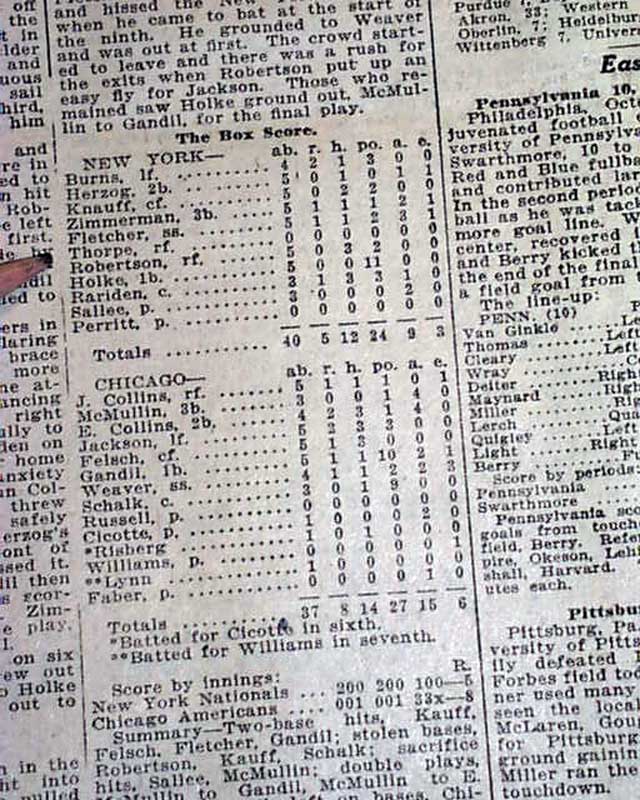 The sport's section covers game 5 of the 1917 World Series between the Chicago White Sox and the New York Giants. The series was won by the Chicago Americans (White Sox), which would be the last time they would win a series until 2005. This series featured "Shoeless" Joe Jackson (for the Sox), and the only World Series appearance ever for Jim Thorpe (for the Giants). While his name only appears briefly in the text  and in the box score, it is historic non the less.
The front page of the sport's section (page 13) has a banner headline: "WHITE SOX Rally In Seventh And Eighth Scoring Six Runs And Beating GIANTS" with subheads. Lengthy, detailed text continues on the next page with: "...Robertson batted in place of Thorpe, the Indian..." with box scores. (see)
Other news, sports and advertisements of the day. Complete in a 60+ page Sunday edition, minor margin wear, a few small binding slits along the spine, generally nice.

wikipedia notes: The great athlete Jim Thorpe, better known for football in general, made his only World Series "appearance" during Game 5, where he was listed in the lineup card as starting in right field; but for his turn at bat in the top of the first inning he was replaced by a left-handed hitting Dave Robertson.