Home > Back to Search Results > Island of Guernsey is free of the Nazis...
Click image to enlarge 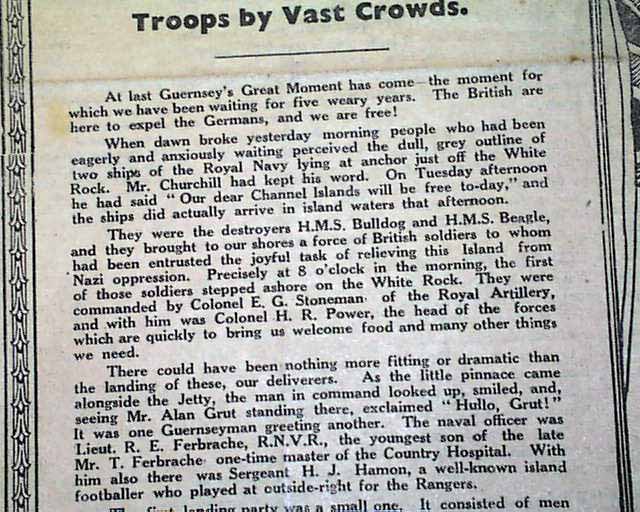 Island of Guernsey is free of the Nazis...

This four page newspaper was published on this island in the English Channel and was occupied by the Germans during most of WWII, from July 1, 1940 through May 9, 1945. During the Nazi occupation they took over this newspaper and filled it with pro-German propaganda, offering a unique insight into how the Axis reported the news during the war.
The front page is quite decorative with a large banner headline: "ISLAND DAY OF REJOICING" with subheads "Rapturous Greeting for British Troops by Vast Crowds" and "Big Ceremony with Military Band on Saturday". The front page text is surrounded by a decorative border and features a the British Union Jack flag in the middle. The text begins: "At last Guernsey's Great Moment has come--the moment for which we have been waiting for five weary years. The British are here to expel the Germans, and we are free!..." with much more. Note also "Freedom" in the masthead.
Pages 2 & 3 have various related reports concerning the "Clearing out of the Germans".
Four pages, 12 by 13 inches, minor chipping at the right margin, generally very nice.