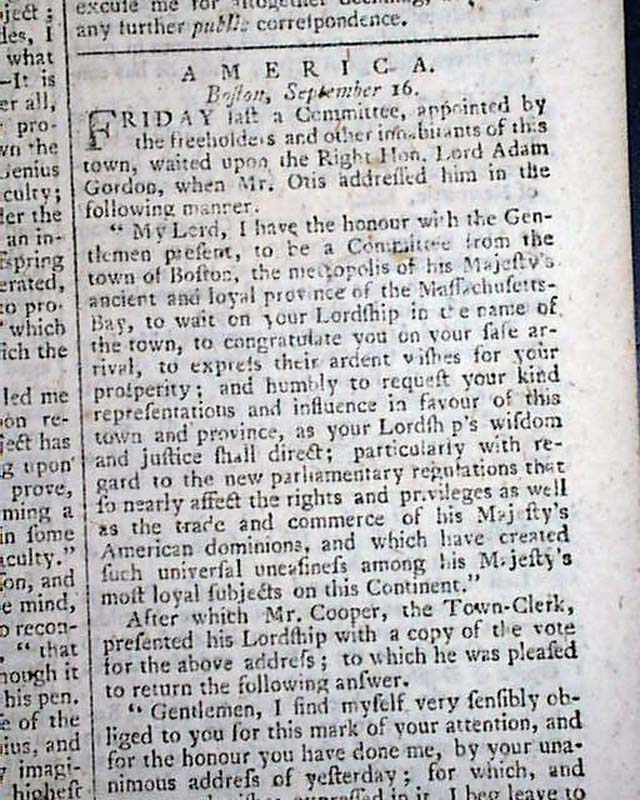 
THE LONDON CHRONICLE, England, Nov. 2, 1765  The front page has most of a column headed "America" with news from Boston (see). Over half of page 4 is taken up with a letter concerning America, beginning with a very prophetic statement: "Little doubt can be entertained that America will in time become the greatest and most prosperous empire that perhaps the world has ever seen.." and further on: "...The North Americans now say & write that they have ever been toiling for the benefit of the Mother country, in which, if they are not considered as children, their treatment is that of slaves; and therefore, if attempted to be oppressed, they must unite in their own defence. They accordingly cry out for union..." with much more (see). There are warnings against restraining trade and imposing taxes.
The back page has a letter from Philadelphia which includes: "We are all in confusion here about the Stamp Act. Very probably you may have heard of the riots, effigy-executions, etc of Stamp Officers at Boston, Rhode Island, Maryland & other places..." with more on the hatred of the Stamp Act (see).
Eight pages, 8 1/4 by 10 3/4 inches, close-trimmed at the bottom causing loss to the last line or two (does affect the pg. 4 article noted), small worm hole thru all leaves.