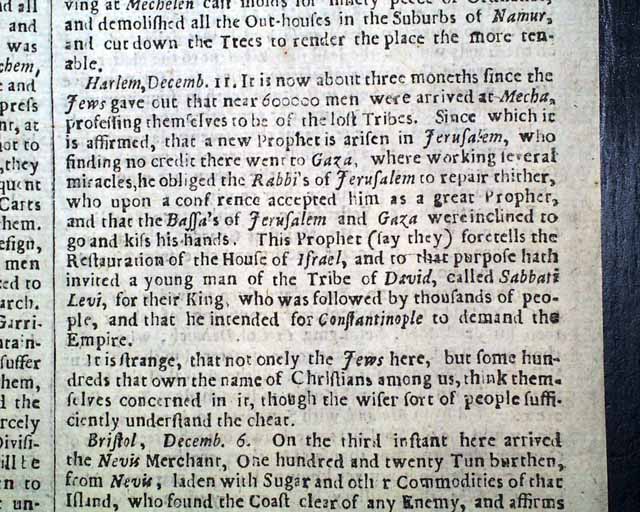 
THE OXFORD GAZETTE, England, Dec. 11, 1665  This is an extremely famous--and rare--title, being the predecessor of the famous "London Gazette", the oldest continually published English language newspaper in the world. Plus this is the #8 issue. Also, because of the Plague at this time, the Royal Court had removed itself from London to Oxford when this newspaper began, so issues #1 thru #23 were published simultaneously in Oxford & London and when the contagion had subsided & the Court returned to London this newspaper went with it and renamed itself "The London Gazette" with issue #24, and the rest is history.

The best content is the great Judaica item on the back page, being a report datelined Harlem and noting: "It is now about 3 months since the Jews gave out that near 600000 men were arrived at Mecha professing themselves to be of the lost Tribes. Since which  it is affirmed that a new Prophet is arisen in Jerusalem, who finding no credit there went to Gaza, where working several miracles he obliged the Rabbi's of Jerusalem to repair thither, who upon a conference accepted him as a great Prophet, and that the Bassa's of Jerusalem and Gaze were inclined to go and kiss his hands. This Prophet (say they) fortells the restoration of the House of Israel, and to that purpose hath invited a young man of the Tribe of David, called Sabbati Zevi, for their King who was followed by Thousands of People, and that he intended for Constantinople to demand the Empire. It is strange that no only the Jews here, but some hundreds that own the name of Christians, among us, think themselves concerned in it, though the wiser sort of people sufficiently understand the cheat." (see).
This is concerning the famed Sabbatai Zevi who claimed to be the long-awaited Jewish Messiah. This may be the earliest mention of him within a bonafide newspaper.

Note: Whereas there are London Gazette mentions of him in what appears to be March, 1665 issues, due to their use of the Julian Calendar which ran its year from April through March, the issues are actually from 1666 (using today's calandar). Their issue nos. verify this as well - with this issue being #8.