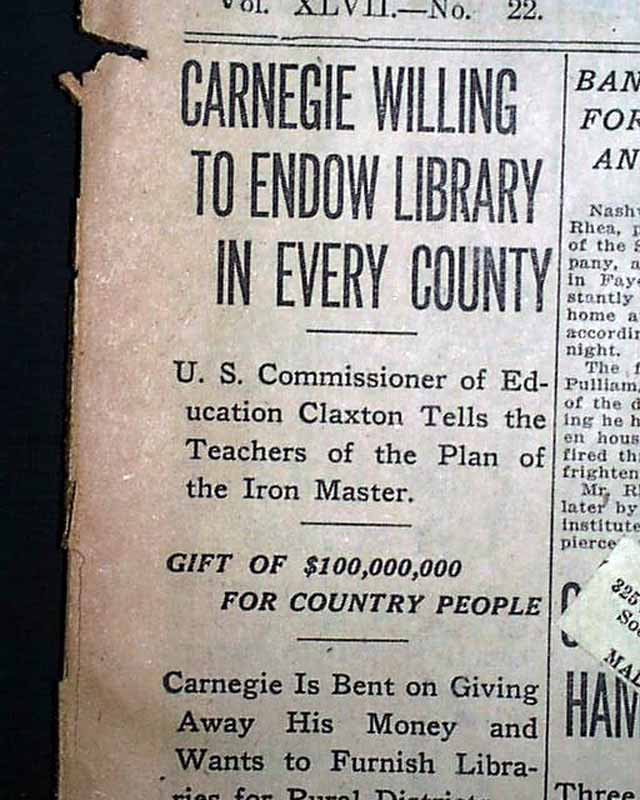 Andrew Carnegie donates to the libraries...


THE ATLANTA CONSTITUTION, Atlanta, Georgia, July 7, 1914  The front page has a column-wide, three-line headline "Carnegie Willing To Endow Library In Every Country" with subheads "U. S. Commissioner of Education Claxton Tells the Teachers of the Plan of the Iron Master" "Gift of $100,000,000" "Carnegie Is Bent on Giving Away His Money and Wants to Furnish Libraries for Rural Districts". "...Philander P. Claxton, United States commissioner of education, at a meeting of state superintendents, announced that Andrew Carnegie has under consideration a plan for the establishment of libraries in country districts that would call for a contribution of between $75,000,000 and $100,000,000 by the steel magnate... He is determined to give his money away and die poor, and here is an opportunity. Seventy per cent of the people of the United States still are without access to good libraries...".
Other news, sports and advertisements are within the issue.
This is complete in 14 pages with some binding slits along the left spine, some chipping at the corners, otherwise is in good condition.