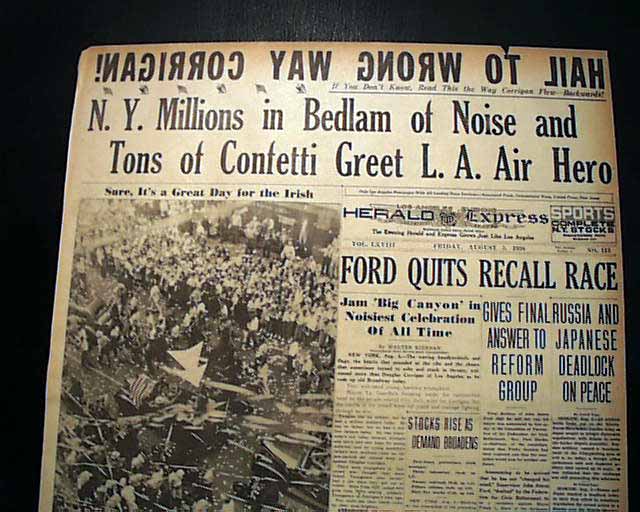 
HERALD EXPRESS, Los Angeles, Aug. 5, 1938  A fascinating issue--or in this case, the front leaf only--as the front page reports the ticker tape parade in New York City for aviator Douglas Corrigan.
This was one of the fascinating tidbits of aviation history. Corrigan flew from Long Beach, California to New York & wanted to fly to Ireland but was denied. So he filed his flight plan to return to Long Beach but flew instead to Ireland, stating "navigational errors" due to heavy cloud cover, etc. (see hyperlink for details). He was given a ticker tape parade in New York City with the banner headline reporting: "N.Y. Millions In Bedlam of Noise and Tons of Confetti Greet L.A. Air Hero" with subheads and a large photo of the parade. But the fascinating part of this item is the banner headline at the very top of the ftpg: " ! NAGIRROC YAW GNORW OT LIAH" and with a small note below it stating: "If You Don't Know, Read this the Way Corrigan Flew--Backwards!" (see)
A very fascinating account offering one of the more fascinating front pages of any 20th century newspaper. Fantastic for display as such. And great also that Corrigan was from Los Angeles, where this newspaper was published. This is the front leaf only, minor chip at the very top margin, generally very nice condition.