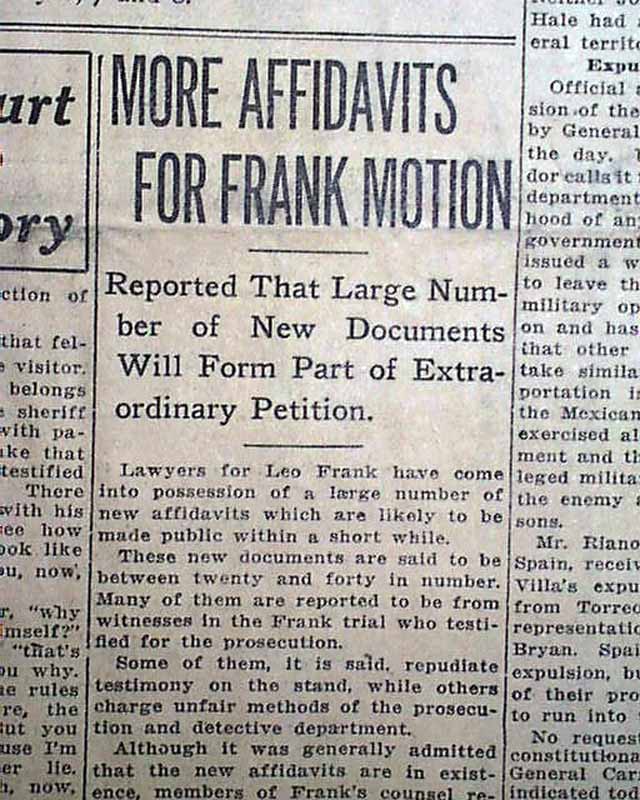 
THE ATLANTA CONSTITUTION, Atlanta, Georgia, April 7, 1914  The front page has an article "MORE AFFIDAVITS FOR FRANK MOTION" with subhead "Reported That large Number of New Documents Will Form Part of Extraordinary Petition". This is pertaining to the affidavits which the lawyers for Leo Frank had recently came into possession.
Another front page article is "Huerta Puts Ban on Consul Agent of United States" with subhead "Exequatur Granted to Geo. C. Carothers Has Been Canceled by Dictator Because of Fall of Torreon" "Alleged That American Favored the Rebels" "Huerta Charges That Carothers Sent Dispatches During the Battle for the Purpose of Aiding (Pancho) Villa". This is pertaining to the battles taking place in Mexico.
"Hiding Burglary Behind the Flag" with subhead "That's What Advocates of Free Canal Tolls Are Doing, Charges Senator McCumber" is pertaining to the controversy of exempting the US ships from the tolls.
Other news and advertisements, including an advertisement for a world cruise through the Panama Canal, are within.
This is complete in 18 pages with a slightly irregular left spine, otherwise in good condition. This should be handled with some care.