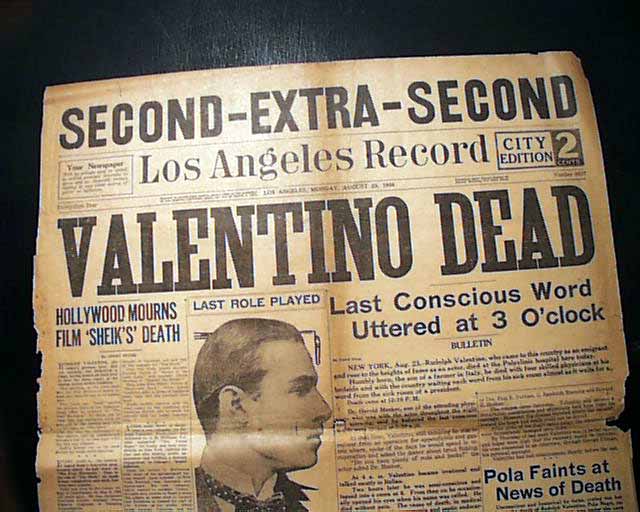 * Rudolph Valentino death
* Latin Lover - The Sheik
* It is BEST to have reports from the city where an event occurred.

This is a front leaf only, and is one of the best presentations on this notable movie star's death I have seen. In large, bold type is:

with subheads: "Hollywood Mourns Film 'Sheik's' Death" and "Last Conscious Word Uttered at 3 O'clock" with a two column photo of him as well.

A terrific item for display and terrific to have in a Los Angeles newspaper, home of the movie industry & where his funeral would be held.

Valentino was an early pop icon, a sex symbol of the 1920s, & was known as the "Latin Lover" or simply as "Valentino". His death caused mass hysteria among his female fans and further propelled him into iconic status.

The complete front leaf only, some minor loss at the margins, more so to the right fold edge, some weakness at the central fold, otherwise quite nice condition.