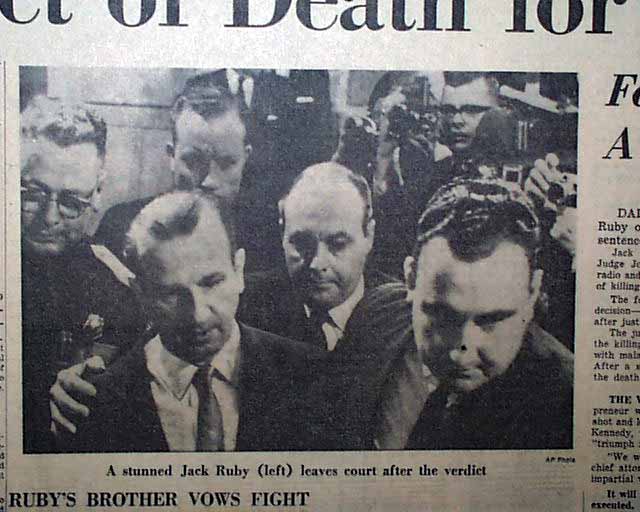 
DETROIT FREE PRESS, Detroit, Michigan, March 15, 1964  This issue has a two line banner headline "How Dallas Jury Reached Verdict of Death for Ruby" with subhead "Fast Decision a Surprise" plus a four column photo of Jack Ruby leaving courtroom after verdict with caption "A stunned Jack Ruby leaves court after the verdict". Additional photos are within the issue. Other articles on the front page are "Ruby's Brother Vows Fight - 'Jack Couldn't Believe It'" and "One Juror Balked At Death Sentence".
Inside the issue is "'Cassius X' Says He's A 'Prophet'". This was a few weeks following his match with Liston when he changed his name to Muhammad Ali.
Also "Happiness Is a 40-ft. Beatle" is the reporting of the close-circuit concert of the Beatles at the theatre. The advertisement is also listed in the paper. Interesting descriptions on the music and bands.
This is complete in 60 pages with small binding holes along the left spine, a library stamp in the upper right corner, otherwise in nice condition.