Home > How to catch bears... a woman in disguise...
Click image to enlarge 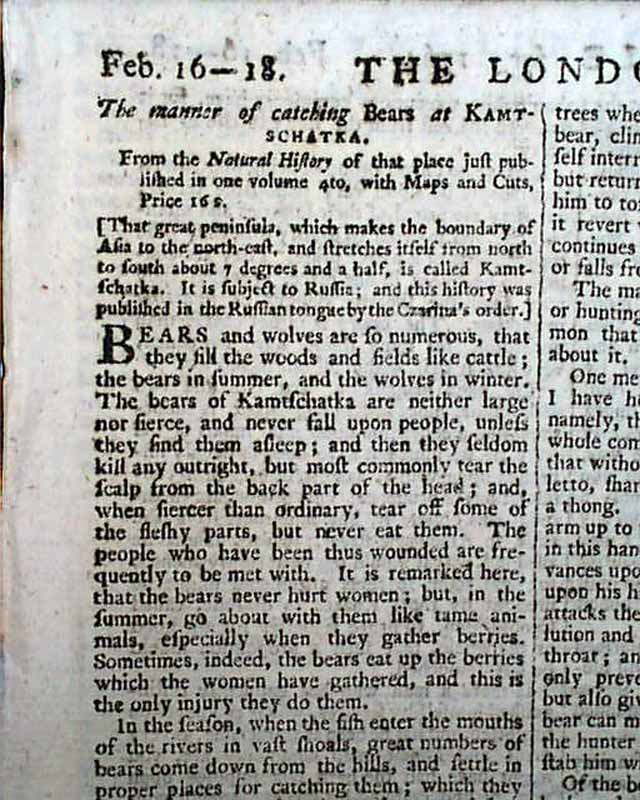 How to catch bears... a woman in disguise...


THE LONDON CHRONICLE: OR, UNIVERSAL EVENING POST, London, February 18, 1764  This carries an interesting article on "The manner of catching Bears at Kamtschatka" which is a peninsula in Russian Far East. "Bears and wolves are so numerous, that they fill the woods and fields like cattle... The bears of Kamtschatka are neither large nor fierce, and never fall upon people, unless they find them asleep; and then they seldom kill any outright, but most commonly tear the scalp from the back part of the head; and when fiercer than ordinary, tear off some of the fleshy parts, but never eat them... bears never hurt women; but, in the summer, go about with them like tame animals, especially when they gather berries...". The article then provides a variety of ways that the bears are caught.
Another article is of a death of a "...woman that went by the name of John Chivy. She dressed always in man's apparel, and passed for a man; and notwithstanding she had been married upwards of 20 years, her sex never discovered till her death...".
Another article of "Among the sundry fashionable routs or clubs, that are held in town, that of the Blacks or Negro servants is not the least. On Wednesday night last, no less than fifty-seven of them, men and women, supped, drank, and entertained themselves... till four in the morning. No Whites were allowed to be present, for all the performers were Blacks."
Other news and advertisements are within.
This is complete in eight pages and is in nice condition.