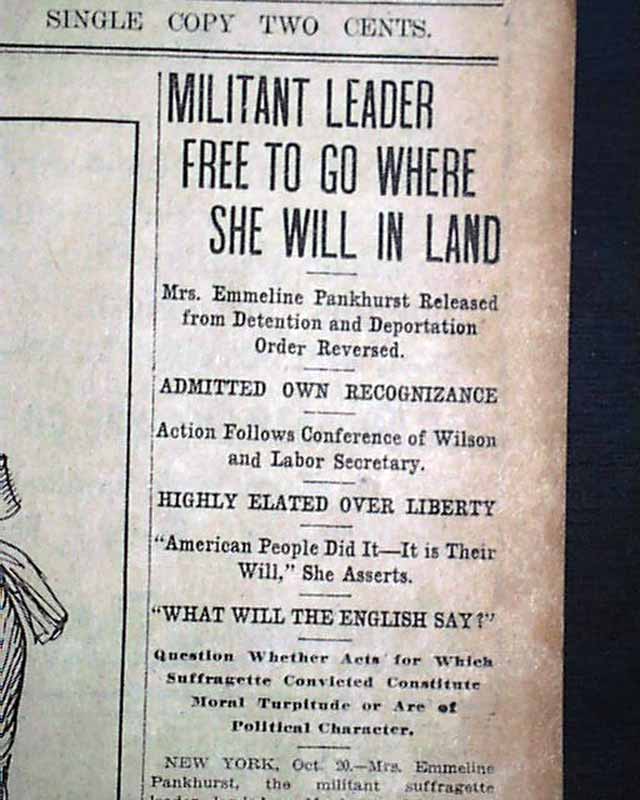 
THE OMAHA DAILY BEE, Omaha, Nebraska, October 21, 1913  The front page has a column wide headline "Militant Leader Free to Go Where She Will In Land" with subheads "Mrs. Emmeline Pankhurst Released from Detention and Deportation Order Reversed" "Admitted Own Recognizance" "Action Follows Conference of Wilson and Labor Secretary" "Highly Elated Over Liberty" "'American People Did It -- It is Their Will,' She Asserts" and more. Mrs. Pankhurst was a well-known British militant suffragette leader who had come to the States for some speaking engagements but initially was being denied entry. "It was difficult to imagine that the slightly built, gray haired little woman who stepped ashore from the ferry boat at the Battery was the same person that for several years had caused the British government so much trouble by reason of her militant tactics in behalf of woman suffrage or her incitation to militancy for the 'cause.'"
Other news of the day and advertisements, including a nice Pabst Blue Ribbon beer ad, are within.
This is complete in 12 pages with several small binding holes along the left spine (which is separated), evening browning, a small piece missing in the upper right corner, some edge chipping, otherwise in good condition. Must be handled with care.