Home > One of the best Kennedy assassination newspapers to be had...
Click image to enlarge 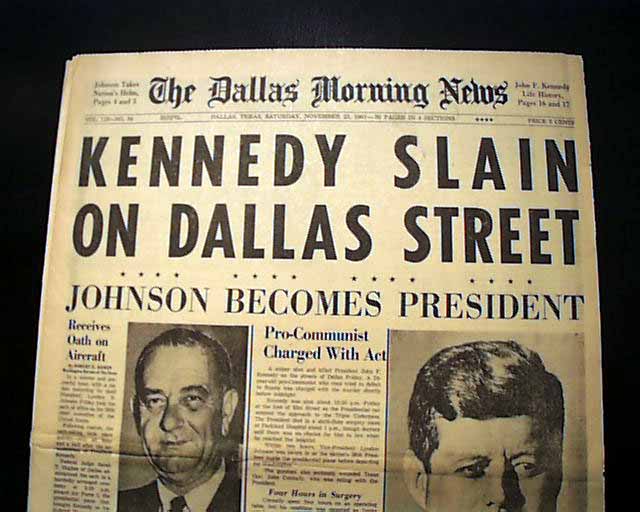 THE DALLAS MORNING NEWS, Nov. 23, 1963  A quite rare & extremely desirable newspaper with a first report on John F. Kennedy's assassination, from the city where it happened.
The two line bold banner headline proclaims: "KENNEDY SLAIN ON DALLAS STREET" with subhead: "Johnson Becomes President", plus a rather large photo of "John F. Kennedy" and a smaller photo of Lyndon Johnson. A considerable amount of related news and photos inside as well.
Of curious interest--and only to be found in a Dallas newspaper--are two inconspicuous advertisements to be found on facing pages inside. One is for the 'Texas" movie theater, where Lee Harvey Oswald was arrested (trivia: he was watching the movie "War Is Hell": see photo) and the facing page has an advertisement for the "Carousel", the night club owned & operated by Jack Ruby (see).
A cornerstone issue for any presidential death or 20th century collection. The complete newspaper with all 50 pages, nice condition.