Home > Back to Search Results > Some news concerning the treaty ending the Revolutionary War...
Click image to enlarge 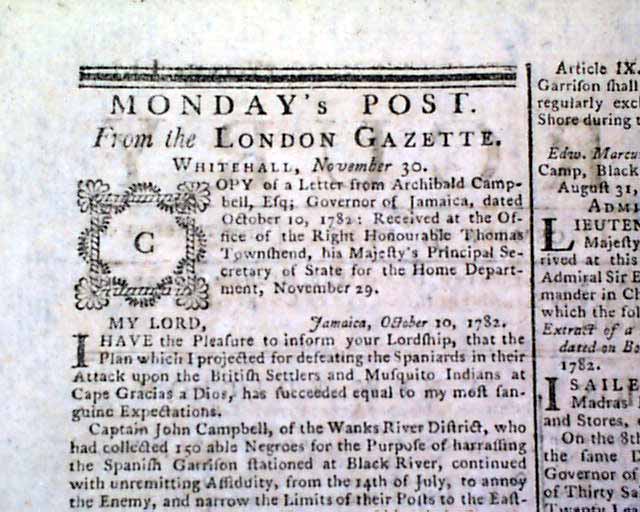 Some news concerning the treaty ending the Revolutionary War...

Page 2 has a report concerning Guatemala which mentions: "Captain John Campbell of the Wanks River District, who had collected 150 able Negroes for the purpose of harassing the Spanish garrison..." with much more on this, & followed by the; "Articles of Capitulation proposed by Don Thomas Julia....Guatemala...and Major James Lowrie, His Majesty's superintendent of the Indians & Mosquito Shore." There is also a report from New York (see).
The back page has an item from London noting: "...earliest opportunity of informing your Lordship that a messenger is just arrived from Paris with an account of provisional Articles being signed on the 30th of November between his Majesty's Commissioners & the Commissioners of the United States of America to be inserted  & constitute a Treaty of Peace..." (see).
Four pages, folio size, full red tax stamp on the ftpg., very nice condition.