Home > Back to Search Results > Battle of White Plains and more...
Click image to enlarge 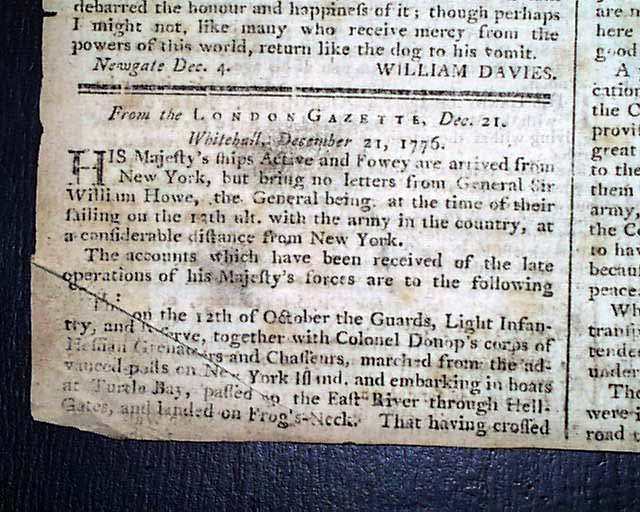 Battle of White Plains and more...


EDINBURGH EVENING COURANT, Scotland, Dec. 25, 1776  Page 2 has some great content on the Revolutionary War including reports on the events just prior to the Battle of White Plains, and also of the battle itself. A few items include: "...General Howe landed some days since upon the continent, about six miles from King's Bridge...took possession of a work of the rebels...The rebels have no retreat left but over the North River into the Jerseys...Our hopes are great on this occasion as letters from General Washington to the Congress have been intercepted...The manner in which General Washington's letters were intercepted was as follows..." with the details. Another report includes: "...On the 25th the advanced corps moved forward to the road which leads to the White Plains where the rebels appeared determined to make a stand; but on the 27th...moved off to the entrances of the White Plains where the main body of the rebels were entrenched...On the 28th...our army marched in columns to attack the rebels, who, seeing the troops in motion, a body of about 8000 came out..." with more details.
Another report includes: "...opinion that the American rebellion will be effectually crushed before the expiration of the present winter. Washington, now totally routed, is quite weary of commanding a host of wretched poltroons; and his troops, emaciated by disease, reduced by desertion, and slaughtered wherever they have attempted to make a stand, are neither to be soothed nor reproached into the field against an enemy whom they deem invincible..." with much more (see).
Page 3 has two letters concerning the Battle of White Plains headed: "Extract of a letter from an Officer of Eminence who was Present at the Engagement of the White Plains..." with both accounts having some nice detail on this famous battle (see).
Four pages, folio size, a bit close-trimmed at the bottom of page 3 not affecting any mentioned content, nice condition.