Home > Back to Search Results > Americans are tired of fighting...
Click image to enlarge 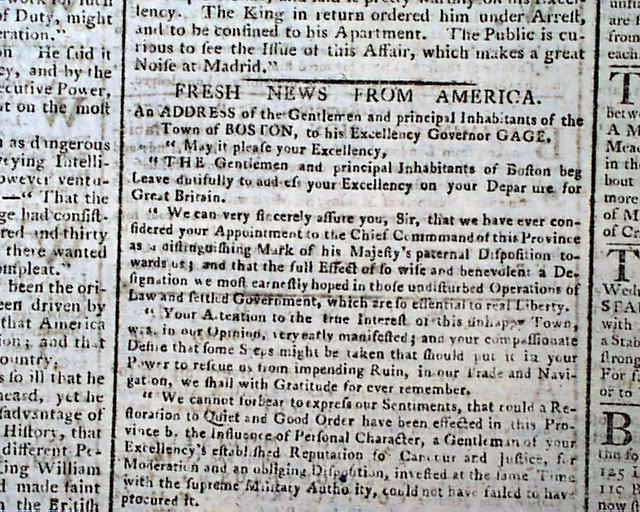 The front page has much on: "Parliamentary Proceedings" which includes some discussion concerning the situation in America but no battle reports. More such reporting on page 2. One item notes: "...It may be depended upon that the Americans in general are tired of being soldiers & are very anxious for an accommodation, however averse the Congress are to it..." and also: "...General Lee...had a mutinous soldier in his corps, upon whom he drew his sword & running it through his body, instantly dispatched him. It is thought that General Lee is not now alive in consequence of this violence."
Also on page 2 is: "Fresh News From America" which has: "An Address of the Gentleman & Principal Inhabitants of the town of Boston to his Excellency Governor Gage." followed by his response signed: Tho. Gage.
Page 3 has reports from the "House of Commons" which includes some talk of America.
Four pages, a bit of mild flaking at the right margin does not affect any text, folio size, generally nice condition.