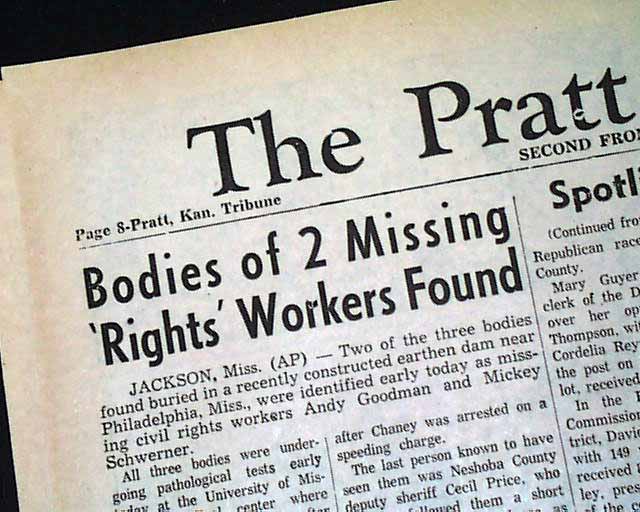 This 16 page newspaper has a one column heading on the front page: "Bodies Found In Mississippi". See images for text here.

Other news of the day throughout. A few small binding holes along spine, otherwise good condition.
wikipedia notes: James Earl Chaney (May 30, 1943 - June 21, 1964) was an Americancivil rights worker who was murdered (along with Michael Schwerner and Andrew Goodman) by members of the Ku Klux Klan.

Chaney was born in the town of Meridian, Mississippi. He had joined the Congress of Racial Equality (CORE) in 1963, and was age 21 when he was killed.

Chaney's murder occurred near the town of Philadelphia, Mississippi, where Chaney was undertaking field work for CORE.

The three (Chaney, Schwerner and Goodman) were initially arrested by Deputy Sheriff Cecil Price for an alleged traffic violation and taken to the jail in Neshoba County. They were released that evening and on the way back to Meridian were stopped by two carloads of KKK members on a remote rural road. The men approached their car and then shot and killed Schwerner, then Goodman, and finally Chaney.

The circumstances surrounding the death of the activists were the subject of the 1990 TV movie Murder in Mississippi, which featured Blair Underwood as Chaney. The 1988 film Mississippi Burning was loosely based upon these events.

Journalist Jerry Mitchell, an award winning investigative reporter for the Jackson Clarion-Ledger, had written extensively about the case for many years. Mitchell, who had already earned fame for helping secure convictions in several other high profile Civil Rights Era murder cases, including the assassination of Medgar Evers, the Birmingham Church Bombing, and the murder of Vernon Dahmer, developed new evidence, found new witnesses, and pressured the State to take action. Barry Bradford, an Illinois high school teacher, later famous for helping clear the name of Civil Rights martyr Clyde Kennard, and three students, Allison Nichols, Sarah Siegel, and Brittany Saltiel, joined Mutchell's efforts. Their documentary, produced for the National History Day contest presented important new evidence and compelling reasons for reopening the case. They also obtained an interview with Edgar Ray Killen which helped convince the State to reinvestigate. Mitchell was able to determine the identity of "Mr. X" the mystery informer who had helped the FBI discover the bodies and smash the conspiracy of the Klan in 1964, in part using evidence developed by Bradford and the students.

On January 7, 2005Edgar Ray Killen, once an outspoken white supremacist nicknamed the "Preacher," pleaded "Not Guilty" to Chaney's murder, but was found guilty of manslaughter on June 20, 2005, and sentenced to 60 years in prison. Chaney's mother Fannie Lee Chaney was the last witness for the prosecution.