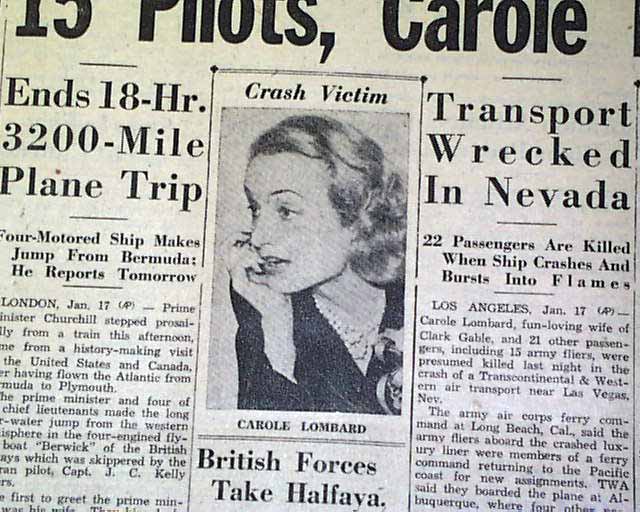 The front page has a nice five column headline that reads: "15 Pilots, Carole Lombard Die" with subheads and photo of Lombard (see photos). 1st report coverage on the TWA Flight 3 disaster in which actress, Carole Lombard, was killed.

Other news and various advertisements of the day throughout. Good condition.

wikipedia notes: When the US entered World War II at the end of 1941, Lombard traveled to her home state of Indiana for a war bond rally. Just before boarding the plane, Lombard addressed her fans, saying: "Before I say goodbye to you all, come on and join me in a big cheer! V for Victory!" At four o'clock (04:00 local time) on the morning of Friday, January 16, 1942, Lombard and her mother boarded a Trans World Airlines DC-3 airplane to return to California. After refueling in Las Vegas, Flight 3 took off on a clear night. However, beacons in the area had been blacked out because of the war, and the plane was 6.7 miles (10.8 km) off course. Twenty-three minutes after takeoff, the plane crashed into "Double Up Peak" near the 8,300-foot (2500 m) level of Mount Potosi, 32 miles (52 km) southwest of Las Vegas. All 22 passengers were killed. A plaque marked the spot, but was stolen sometime in 2007.[citation needed]

Shortly after her death at the age of 33, Gable (who was inconsolable and devastated by her loss) joined the United States Army Air Forces, serving as a gunner on a bomber on combat missions over Europe. The Liberty ship SS Lombard was named for her and Gable attended its launch on January 15, 1944.

Lombard's final film, To Be or Not to Be, directed by Ernst Lubitsch and co-starring Jack Benny, a satire about Nazism and World War II, was in post-production at the time of her death. The film's producers decided to cut the part of the film in which her character asks "What can happen in a plane?" as they felt it was in poor taste, given the circumstances of Lombard's death. A similar editing instance happened when the 1940 Warner Brothers cartoon A Wild Hare was reissued. Lombard's name was originally mentioned in a game of "Guess Who" between Bugs Bunny and Elmer Fudd, but all reissue prints have the name dubbed over with Barbara Stanwyck's.

On January 18, 1942, Jack Benny did not perform his usual program, both out of respect for Lombard and grief at her death. Instead, he devoted his program to an all-music format.

At the time of her death, Lombard had been scheduled to star in the film They All Kissed The Bride; when production started, her role was given to Joan Crawford. Aware that she had received the role only because of Lombard's death, Crawford donated all of her pay for this film to the Red Cross.

Lombard is interred at the Forest Lawn Memorial Park Cemetery in Glendale, California. The name on her crypt marker is "Carole Lombard Gable". Although Gable remarried, he was interred next to her when he died in 1960. He always felt responsible for her death. Her mother, Elizabeth Peters, who also perished in the plane crash that killed her daughter, was interred on the other side of her. 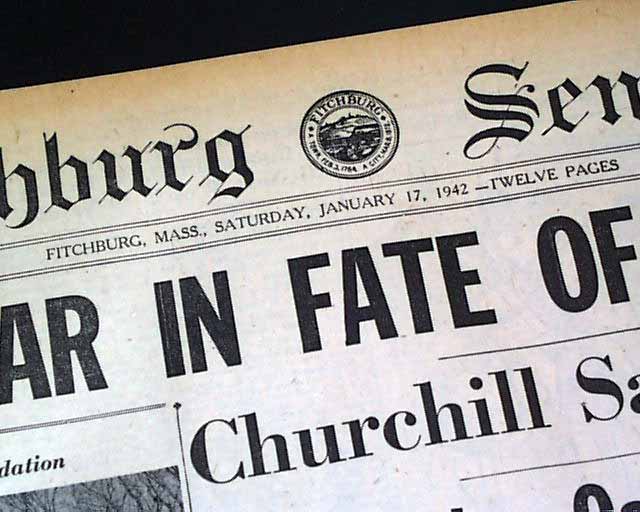 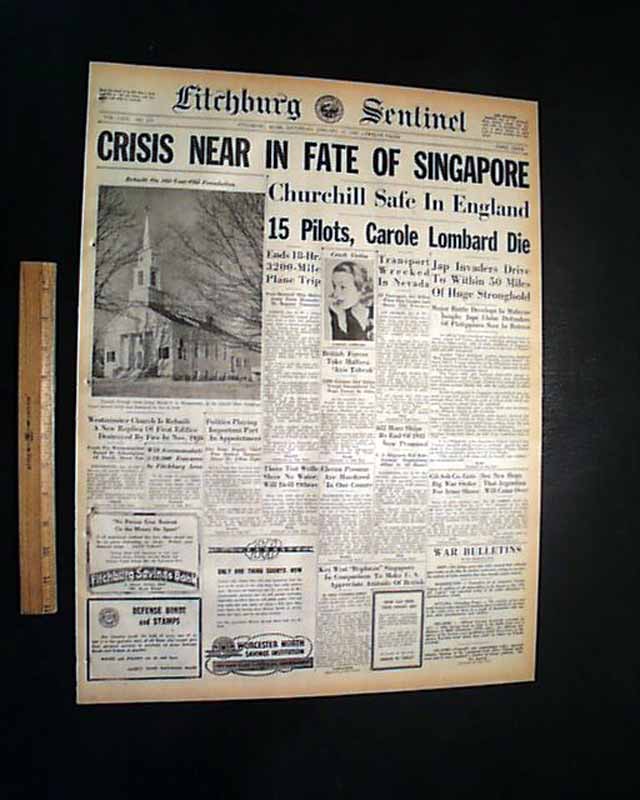 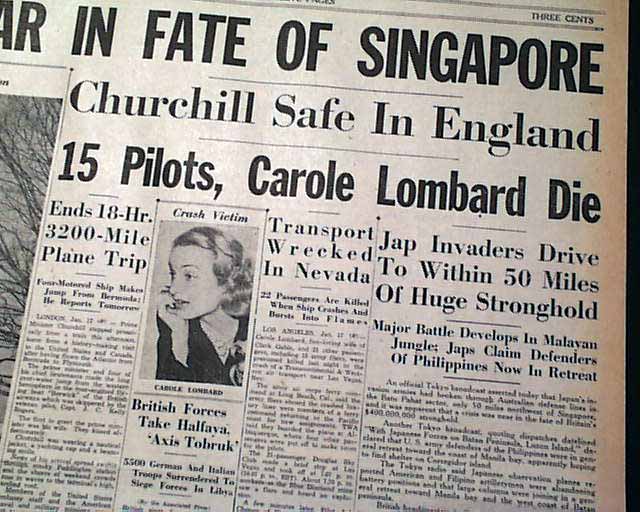 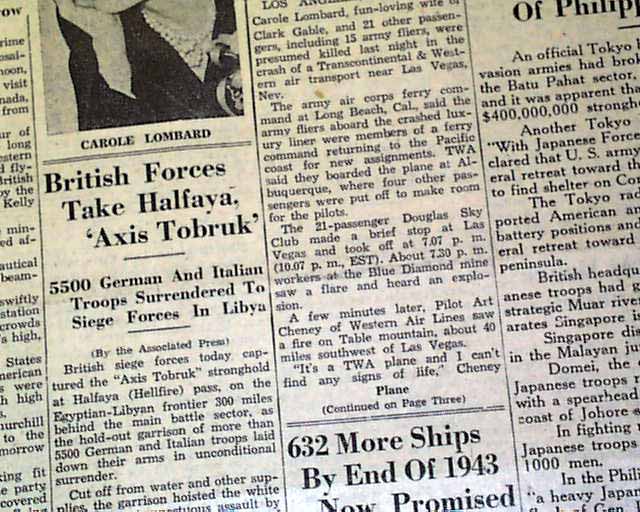 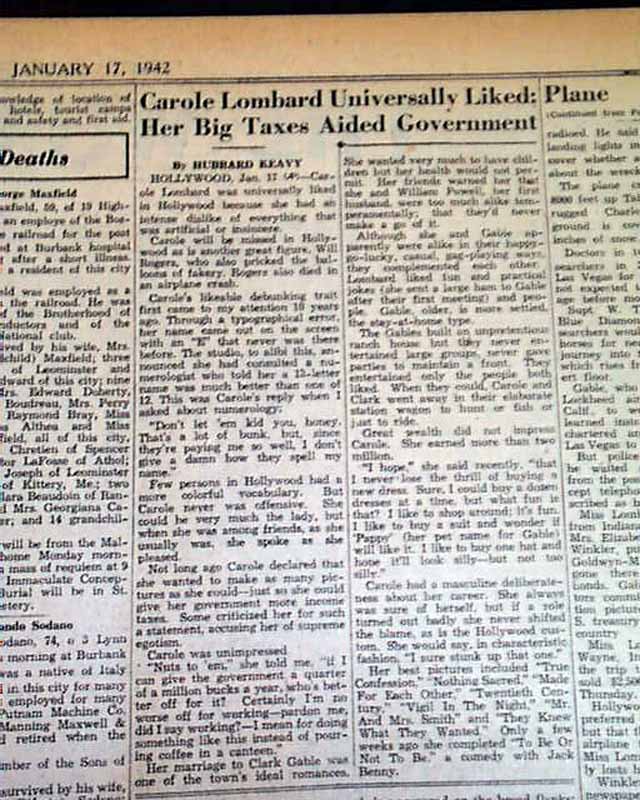