Home > The Czar is married...
Click image to enlarge 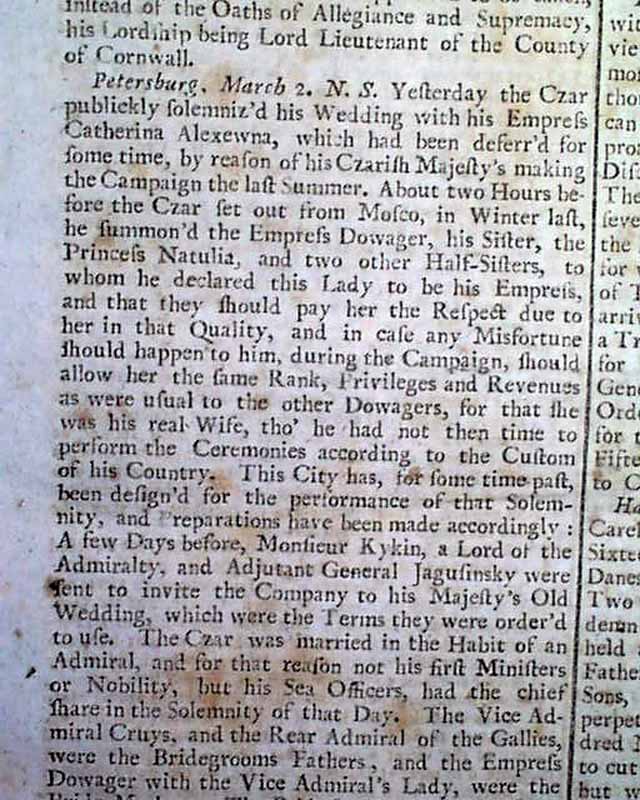 The Czar is married...


THE LONDON GAZETTE, London, April 5, 1712  The front page of this issue carries the news from Petersburg "Yesterday the Czar publickly solemniz'd his Wedding with his Empress Catherina Alexewna, which he had deferr'd for some time, by reason of his Czarish Majesty's making the Campaign the last Summer... The Czar was married in the Habit of an Admiral... The Bride-Maids were two of the Empress Catherina's own Daughters, one about five and the other about three Years Old..... The Wedding was perform'd privately at Seven a Clock in the Morning, in a little Chapel... The Company at the Palace was very splendid, the Entertainment magnificent, and the Evening was concluded with a Ball, Fireworks, and Illuminations.". Other details of the wedding are included.
Another report is from Hanover where "... Two officers of the Suedish Fleet have been condem'd to have their Heads struck off, for having held a Correspondence with the Danes, and their Father, who was privy to these Actions of his Sons, and did not discover them, is confin'd to a perpetual Imprisonment..."
Other news and notices are within.
This is a single sheet issue with lite scattered foxing, otherwise is in nice condition.