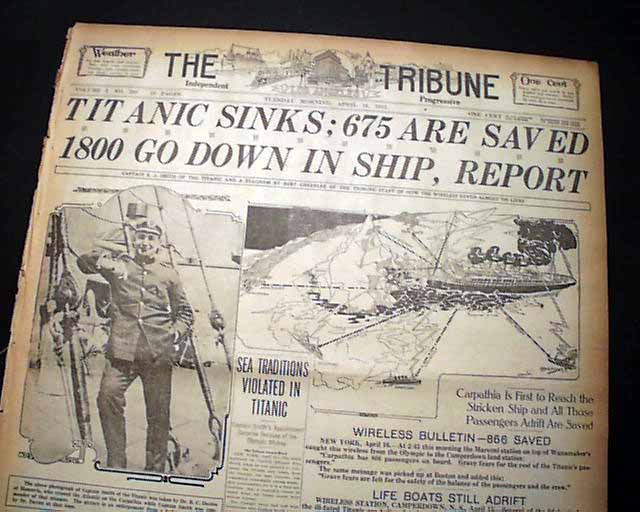 One of the best early reports to be had as the headline is just what customers want, and the front page includes two nice graphics. The banner headline reads: "TITANIC SINKS; 675 ARE SAVED" "1800 GO DOWN IN SHIP, REPORT" with various related subheads and several dispatches with the latest news reports as known before press time (see).
One graphic is an illustration of the ship at its location when it struck the iceberg, also showing the relative position of the other ships in the vicinity (see). The other graphic is a large photo of Captain smith of the Titanic, taken some time prior when he was  captain of the steamer Carpathia (see).
Coverage continues on the inside with a terrific and very large graphic on pages 2 & 3 showing a cross section of the Titanic, with a two page banner head beginning: "Worst Marine Disaster In History Of The World..." (see). Much detail on the ship including a very lengthy list of all the passengers.
Complete in 18 pages, minor margin wear, nice condition although the fragility of newsprint of this era always requires careful handling.