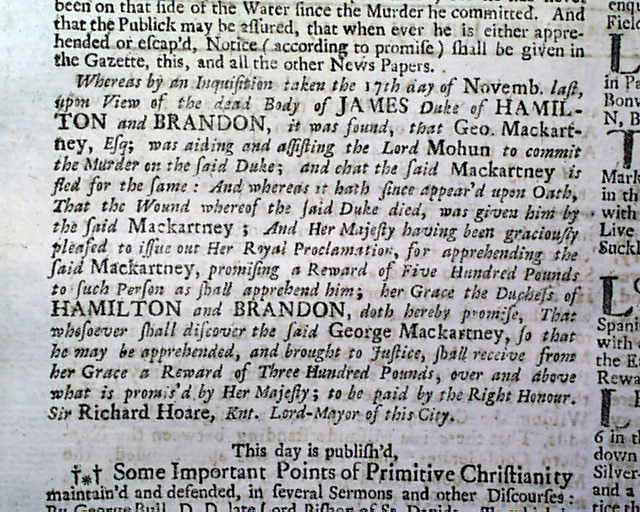 
THE POST BOY, London, January 24, 1712-13 The decorative masthead of this issue includes two nice engravings, one of a newsboy on horseback and the other is a trumpeting angel.

The back page contains the reports and letters that the escape of Mr. Mackartney's escape to Holland was false, "for he has never been on that side of the Water since the Murder he committed..." The article continues with the a Royal Proclamation announcement for Mr. Mackartney's arrest, including a 300 pound reward, who had been found to be the one who committed the murder of James Duke of Hamilton and Brandon in November, along with aiding and assisting the Lord Mohun to commit the said murder.

The back page also includes an advertisement "The Black Memorial; or, a list of the names of those pretended Judges who State and sentenced to Death, our Sovereign King Charles I in the Place which they call'd the High-Court of Justice, Jan. 27 1648..."

This is a single sheet issue containing a partial red ink tax stamp on the back page and is in nice condition. See photos for details.

Source: Wikipedia...In 1712, two years after Mohun's Whig party had been heavily defeated in an election, the Duke of Hamilton was given the post of special envoy to Paris. Also at this time Mohun's legal dispute with Hamilton over his inheritance of the Macclesfield estate was going badly. Shortly before Hamilton left for France, Mohun challenged him to a duel which was fought on 15 November in Hyde Park. Hamilton was killed during the fight by Mohun's second, George MacCartney, after he had mortally wounded Mohun during the duel; Mohun died from his wounds shortly afterwards. This bloody duel was made immortal by William Makepeace Thackeray in his novel The History of Henry Esmond. The injuries suffered by the two men were so horrific that the government passed legislation banning the use of seconds in such duels. Also as a result swords were replaced as the weapons of choice in duel by the pistol, which tended to result in shorter and less bloody fights.