Home > Ben Franklin on the morals of chess...
Click image to enlarge 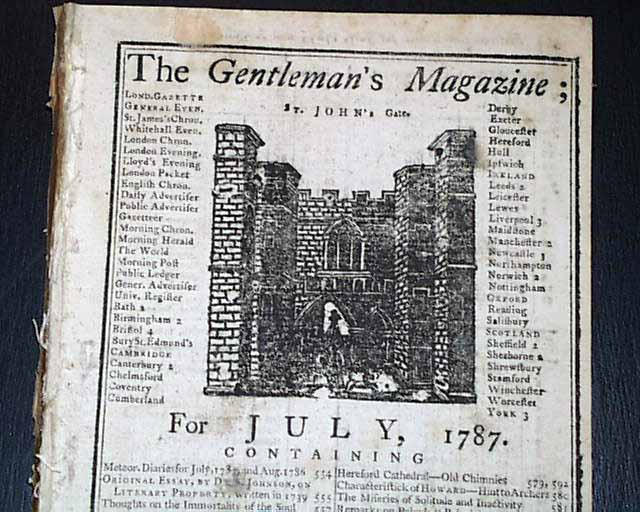 Within the issue is an interesting article titled: "The Morals Of Chess, By Dr. Franklin of Philadelphia" which takes nearly two pages (see). The article begins: "The game of chess is not merely an idle amusement; several very valuable qualities of the mind, useful in the course of human life are to be acquired & strengthened by it..." with much, much more  An interesting & uncommon item by Ben Franklin & rare to find Franklin articles from during his lifetime.
Relating to this is an article on the game of chess & how it is strategically played, found near the back of this issue. This articles takes close to a full page (see)
Also of interest in this issue include: "Dr. Hershel's Recent Discovery of Volcanoes in the Moon". Near the back is "American News" which includes mention of Governor Bowdoin issuing a Proclamation for apprehending those involved in the Shays' Rebellion, with Ben Franklin approving of the proclamation (see). Also reported is an almost laughable comment on the efforts of the Constitutional Convention: "This country is at present on the verge of being thrown into popular ferment; delegates are sent from every state to Philadelphia to form a convention for the purpose of revising, altering, or perhaps totally annihilating the different constitutions of the country. This will, no doubt, produce a scene of confusion & anarchy. Dr. Franklin and General Washington are members of  this convention." (see)
Included are both full page plates called for (see).
Complete in 96 pages with a full title/contents page with an engraving of St. John's Gate, 5 by 8 1/4 inches, nice condition.

A very nice magazine with a wide range of varied content including news of the day, political reports, literary items, and other unusual tidbits. This was the first periodical to use the word "magazine" in its title, having begun in 1731 and lasting until 1907.