Home > By a woman publisher during the Revolutionary War...
Click image to enlarge 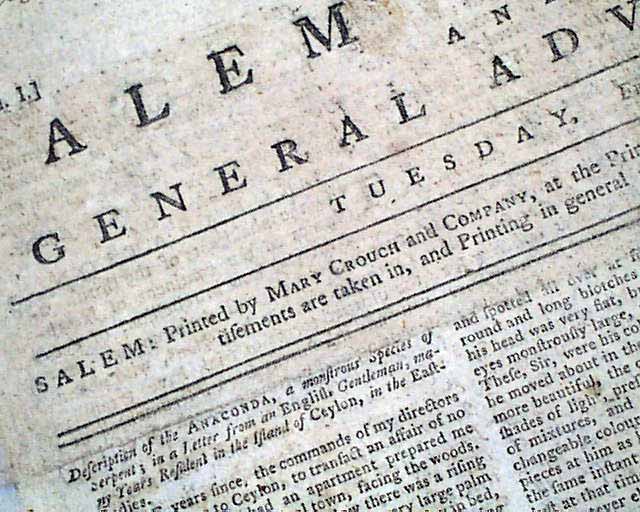 By a woman publisher during the Revolutionary War...


THE SALEM GAZETTE & GENERAL ADVERTISER, Massachusetts, Feb. 6, 1781  This is one of the more rare titles we have offered from the Revolutionary War, a newspaper not only published by, but started by a woman, Mary Crouch. See the hyperlink for much more on Mary Crouch, but suffice it to say she was no stranger to publishing a newspaper as she had much experience at such in South Carolina (see the hyperlink). When the British occupied her town in 1780 she moved to Salem where she began publishing this "Salem Gazette" in 1781 but which lasted only for 36 issues. This is issue number 6. Relatively few institutions hold any issues of this title, and only four issues of this date are held by institutions.
Although the scarcity of any issues of this title and it being published by a woman--a rarity in the 18th century--is sufficient to warrants its price, the content is notable as well. Page 2 has a letter from Fredericksburg, Virginia, beginning: "The enemy came to Richmond on Friday...with 1500 infantry & sixty horse...destroyed public stores, burnt public buildings..." with more Also: "The British forces which lately embarked at New York have landed in Virginia...Arnold, with about 1500 men...landed 15 miles below Richmond..." with more. Page 2 also has: "A Declaration" by Sir Henry Clinton which asks citizens to return their allegiance to the King. But this is a terrific report, as several paragraphs are interrupted by the patriotic publisher with her own response to the request (see). The Declaration includes: "...The door is thus again thrown open (if happily you are disposed to avail yourselves of the opportunity it affords) for commencing negociations which may instantly terminate the miseries of your country." followed by the editor's comment: "Shut your door, Sir Harry, and put a hundred bars upon it. Our country is not miserable. We are a people free and happy, who do not deserve so many favours." More interjections like the, with the entire piece "to be continued" (see).
Page 3 has a poem: "To General WASHINGTON on the Late Conspiracy", presumed to be the traitorous action of Benedict Arnold (see).
The back page is almost entirely taken up with some terrific correspondence on the Revolutionary War activities in South Carolina (see).
Complete in four pages, never-trimmed margins, archivally rejoined at the spine, some toning to the front page, otherwise in very nice condition. An exceptionally rare title and the first we have offered in over 35 years.

One of the more rare Revolutionary Wa...