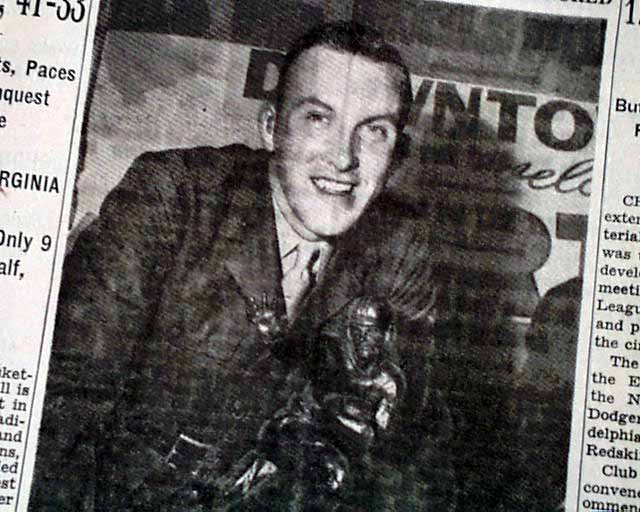 This 44 page newspaper has one column headlines on page 24 that include: "BERTELLI PRAISED AT CEREMONY HERE"; "Former Notre Dame Ace Gets Heisman Award at Luncheon in the Downtown A.C." with photo.

As a sophomore, Bertelli, still a single-wing tailback, led the nation with a 56.9 percent passing average, completing 70 of 123 attempts. In 1942, Leahy switched to a modified T-formation, in which Bertelli would play under the center and take every snap. As he told his budding star, "Bert, you're the finest passer and the worst runner I've ever coached." That summer, preparing for his new role, Bertelli said he took "a thousand snaps...maybe a million." Bertelli and the T-formation were an immediate success. He passed for 1,039 yards and 10 touchdowns. Celebrated sportswriter Grantland Rice referenced Bertelli as "the T-formation magician."

During his senior year in 1943, the Marine Corps activated Bertelli after six games of Notre Dame's 10-game season. In the six games Bertelli started in, he threw 36 passes, completing 25 with 10 touchdowns. Bertelli's six-game 1943 performance was enough to win the Heisman Trophy earning 648 votes. During Bertelli's three seasons, Notre Dame lost only three games. In 1943, Notre Dame won 43 to 5 on average.

Bertelli's collegiate career earned him multiple awards. He was named to the 1942 and 1943 All-American teams. In the Heisman voting for America's outstanding college football player, Bertelli finished second in 1941 and sixth in 1942 before capturing the trophy in 1943. Though on active duty with the Marine Corps, the Boston Yanks selected Bertelli as their number one draft choice in 1944. Bertelli was later inducted to the College Football Hall of Fame in 1972