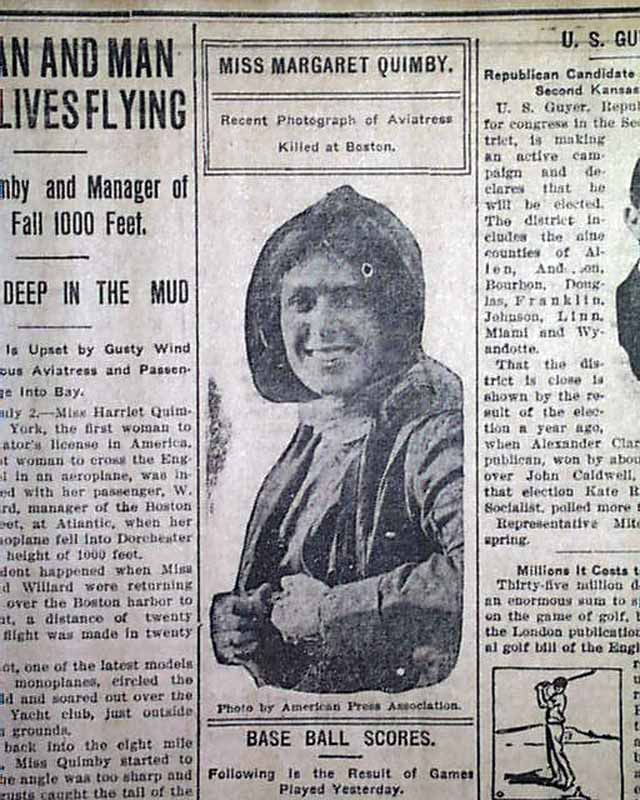 This 8 page newspaper has one column headlines on page 3: "WOMAN AND MAN LOSE LIVES FLYING", "Miss Quimby and Manager of Meet Fall 1000 Feet", "Bodies Deep In The Mud", "Monoplane Is Upset by Gusty Wind and Famous Aviatress and Passenger Plunge Into Bay" with photo of Quimby with caption: "Miss Margaret Quimby". Please see photos for article details.

Other news and advertisements of the day. Light browning with little margin wear, otherwise good condition. Should be handled with care.

On July 1, 1912 Quimby flew in the Third Annual Boston Aviation Meet at Squantum, Massachusetts. Ironically, although she had obtained her ACA certificate to be allowed to participate in ACA events, the Boston meet was an unsanctioned contest. Quimby flew out to Boston Light in Boston Harbor at about 3000 feet, and then returned and circled the airfield. William Willard, the organizer of the event, was a passenger in her brand-new two-seat Bleriot monoplane. At an altitude of 1,500 feet (460 m) the aircraft unexpectedly pitched forward for reasons still unknown. Both Willard and Quimby were ejected from their seats and fell to their deaths, while the plane "glided down and lodged itself in the mud".