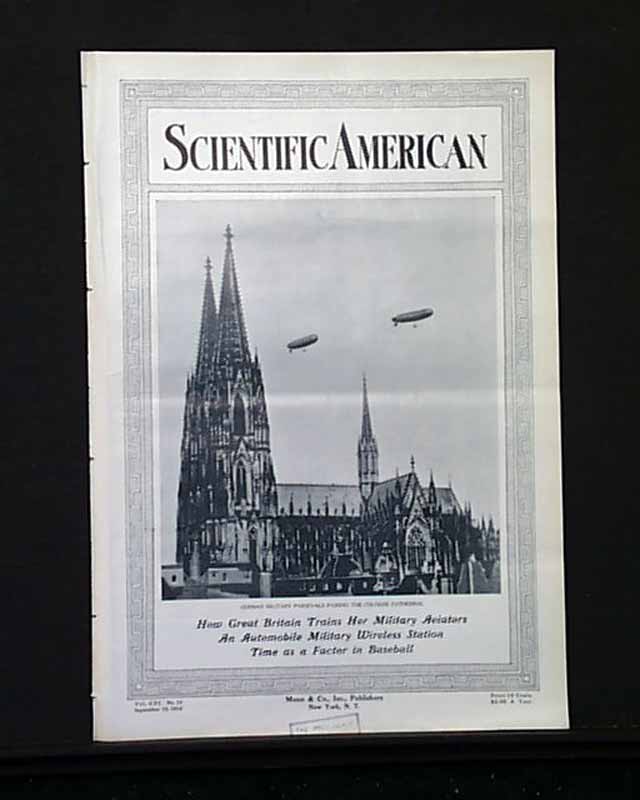 The front page has construction scenes of the Tunkhannock Creek Viaduct, with addition images and text on inside pages.  The issue also contains interesting images and articles related to baseball ("Time as a Factor in Baseball"), early aviation ("How Great Britain Trains Her Military Aviators") - which is located on the outer wrapper, and automotive interest ("An Automotive Radio-Telegraph Station for War Use"), and more.  All included related images.  Additional articles and period advertising are present throughout.

This is complete in 16 pages and is in very nice condition.  The outer wrapper has a library stamp in the lower margin which does not impact the print (see images).

Background (source - Wiki):  Tunkhannock Viaduct (also known as the Nicholson Bridge) is a concrete deck arch bridge that spans the Tunkhannock Creek in Nicholson, Wyoming County, Pennsylvania in the United States. It was the largest[clarification needed] concrete bridge in America when it opened, and remained so even 50 years later.[2]

The bridge contains about 169,000 cubic yards (129,000 m3) of concrete and 1,240 short tons (1,120 t) of steel.[3] It is 2,375 feet (724 m) long and 240 feet (73 m) tall when measured from the creek bed (300 feet (91 m) tall from the bedrock). The bridge was built as part of the Clark's Summit-Hallstead Cutoff, which was part of a project of the Lackawanna Railroad to revamp a winding and hilly system. This rerouting was built between Scranton, Pennsylvania and Binghamton, New York. All thirteen piers were excavated to bedrock, which was up to 138 feet (42 m) below ground level. Almost half of the bulk of the bridge is underground.

The bridge was built by the Delaware, Lackawanna and Western Railroad and was designed by Abraham Burton Cohen.[4]. Construction on the bridge began in May 1912, and dedication took place on November 6, 1915.[5] It was listed on the National Register of Historic Places on April 11, 1977.[1] Today, the bridge is owned by the Canadian Pacific Railway and is used daily for regular through freight service, including those of the Norfolk Southern.