Home > First use of the term "Columbia"... Military accounts from Georgia & Florida...
Click image to enlarge 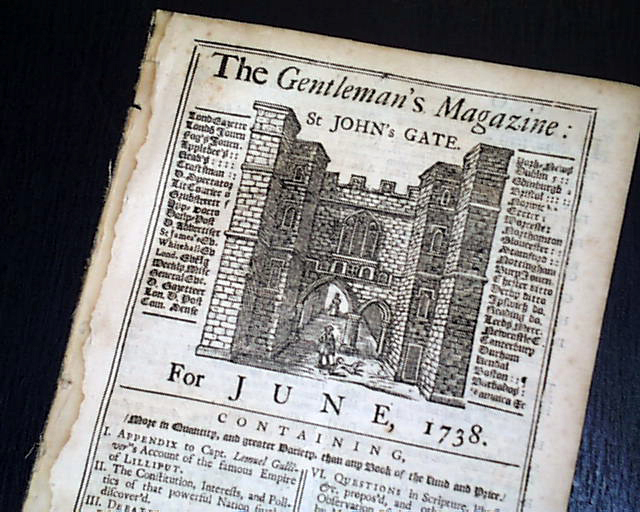 First use of the term "Columbia"... Military accounts from Georgia & Florida...

A very nice pre-Revolutionary War magazine from the "mother country" with a wide range of varied content including news of the day, political reports, literary items, and other unusual tidbits. This was the first periodical to use the word "magazine" in its title, having begun in 1731 and lasting until 1907.
The beginning of the issues has "Debates in the Senate of Magna Lilliputia". Since publication of Parliamentary debates was illegal, they were issued under the thin guise of "Reports of the Debates of the Senate of Lilliput" or similar headings, with fictitious names used for most individuals & places. Of great significance in this issue is the very first use of the term "Columbia" to refer to America. The debates from Parliament note: "...It is observable that their conquests and acquisitions in Columbia (which is the Lilliputian name for the country that answers our America,) have very little contributed to the power of those nations..." with more (see). A very significant "first".
Near the back in the: "Historical Chronicle" is an article: "There being Several various Accounts published in the News Papers from Carolina and Georgia, we have obtained a true & Authentick Account being a Narrative from Savannah in Georgia of what passed to the 20th of April last." What follows is a lengthy military encounter in Georgia and Florida, including mention of James Oglethorpe (see photos). This takes close to a full page (see).
There are no plates or maps called for in this issue.
Complete in 48 pages, measures 5 by 8 inches, full title/contents page with an engraving of St. John's Gate. Nice condition.