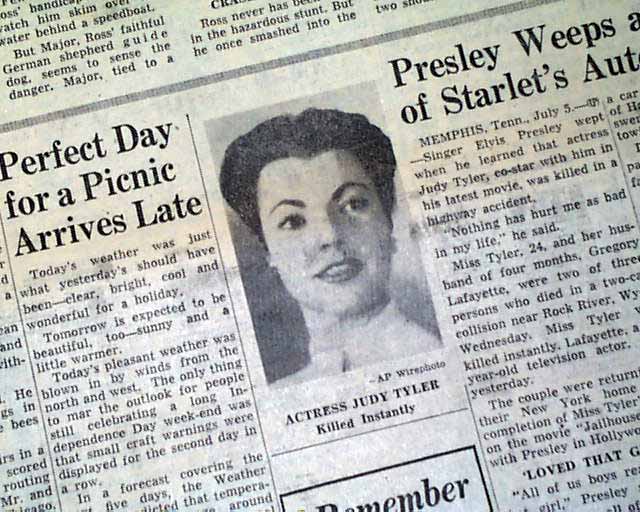 This 44 page newspaper has a two column headline on page 3: "Presley Weeps at News of Starlet's Auto death" with smaller subheads and small photo (see photos).

Tells of the death of Hollywood actress Judy Tyler. She was made famous for co-starring with Elvis Presley in the famous movie "Jailhouse Rock".

Other news of the day throughout including period advertising. Some small binding holes along the spine, otherwise in good condition.

wikipedia notes: Offered an opportunity in Hollywood, Tyler appeared in the film Bop Girl Goes Calypso then starred opposite Elvis Presley in Jailhouse Rock (1957). After completing filming of the Presley movie, she and her second husband, Greg Lafayette, took a vacation. While driving through Wyoming, they were involved in an automobile accident on U.S. Route 287, just north of Rock River, Wyoming, that claimed both their lives. Presley said that he could never watch Jailhouse Rock because he was so saddened by her death. In a strange turn of events Tyler and Pipe Dream co-star William Johnson both died of injuries sustained in car accidents the same year.