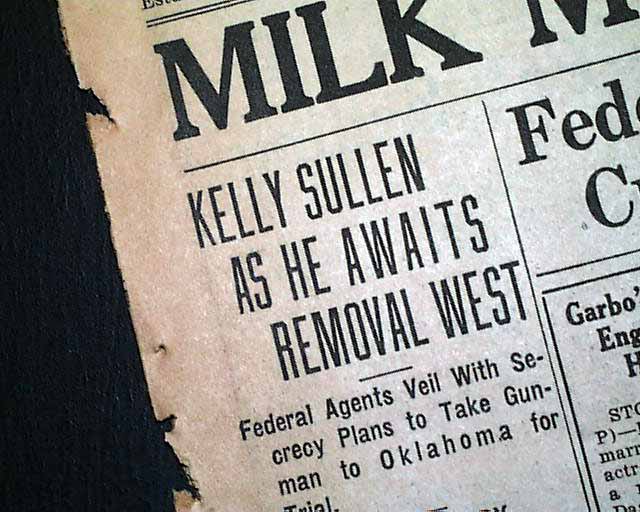 This 20 page newspaper has one column headlines on the front page that include:  "CONVICTS STILL AVOID CAPTURE", "Indiana State Police Continue Intensive Search for 10 Who Escape...."and more.

Tells of the famous jail break at Michigan City, Indiana that was lead by a unknown outlaw by the name of John Dillinger. His name is not mentioned in the report  because of this reason. This was the scene at the beginning of the blockbuster movie "Public Enemies".

Also on the front page is reporting on the capture of then famous George "Machine Gun" Kelly with one column headlines that include:  "KELLY SULLEN AS HE AWAITS REMOVAL WEST", "Army Planes Ready To Transport Him" and more (see photos).

Two key reports in one issue. The end of one famous gangster and the beginning of another.

Other news of the day throughout including various advertisements. Light browning, minor margin wear but otherwise in good condition.

wikipedia notes: The escape  occurred on September 26, 1933.  After months of robbing banks, John Dillinger had finally accumulated enough money to finance the prison break.  The safe houses had been arranged and the employee of the thread company had been bribed; the guns were hidden within the barrel of thread and marked with an "x".

The weapons were received inside of the prison around September 24, 1933.  Walter Dietrich was the receiving clerk for the shirt factory and had removed the three automatic pistols from the barrel of thread.  Dietrich told the rest of the Gang that the weapons had arrived.

The other Gang members included Harry Pierpont, Charles Makley, Ed Shouse, John Hamilton, Russell Clark, Joseph Fox, Joseph Burns, James Clark, and Jim Jenkins.  Earl Northern, Mary Kinder's brother, had also planned to join the escape, but was unable to do so because he was sick.

Meanwhile, Walter Dietrich lured Assistant Warden Albert Evans into the shirt factory basement by telling him that he had found a bottle of homemade wine, or hooch, and did not want to get in trouble for it.  As he entered the basement, Evans was also taken hostage.

At the first of the three gates they would have to pass, Evans instructed the guard, Frank Swanson, "They have guns.  Open the gate or they will kill us." Swanson opened the gate and was instructed to join the procession.  The guard at the next gate, Guy Burklow, also opened his gate as instructed and joined the ever growing group of hostages.  The guard at the final gate, Fred Wellnitz attempted to grab his weapon when he realized what was happening, but was beaten unconscious by the inmates.  The inmates used Wellnitz's keys to open the final gate and enter the prison's Administrative Building.

In the Administrative Building the inmates rounded up eight clerks and the prison Warden.  One clerk, Finley Carson, was shot during the escape.

The other inmates ran to the Standard Oil gas station across the street and flagged down a passing vehicle driven by Herbert Van Valkenberg.  Once stopped, the inmates ordered Herbert, his wife, and an elderly relative from the vehicle.  The inmates piled into the car and sped away as the prison sirens began to wail.