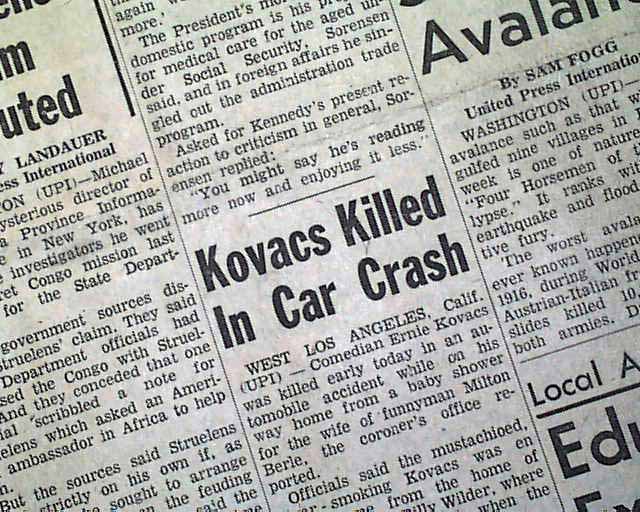 This 8 page newspaper has a one column headline on the front page:  "Kovacs Killed In Car Crash". Tells of the death of famed comedian Ernie Kovacs.

Other news of the day. The paper is in good condition.

wikipedia notes: Ernie Kovacs was killed in an automobile accident in Los Angeles in the early morning hours of January 13, 1962. After meeting Adams at a baby shower given by the Billy Wilders for Milton Berle and his wife, who had recently adopted a 3 year old boy, the couple left in separate cars. Kovacs had been working for much of the evening before the party. Minutes later, during an unusual southern California rainstorm, the comedian lost control of his Chevrolet Corvair station wagon while turning fast. Crashing into a power pole at the corner of Beverly Glen and Santa Monica Boulevards, he was thrown halfway out the passenger side, dying almost instantly from chest and head injuries.

Kovacs may have lost control of the car while trying to light a cigar. A photographer managed to arrive moments later, and morbid images of Kovacs in death appeared in newspapers across the United States. An unlit cigar lay on the pavement, inches from his outstretched arm. Years later, in a documentary about Kovacs, Edie Adams described telephoning the police impatiently when she learned of the crash. An official cupped his hand over the receiver, saying to a colleague, "It's Mrs. Kovacs, he's on his way to the coroner - what should I tell her?" With that, Edie Adams's fears were confirmed, and she became inconsolable. Jack Lemmon, who also attended the Berle party, identified Kovacs' body at the morgue when Adams was too distraught to do it.

After attending funerals for Hollywood friends, Kovacs had expressed his wishes to Adams that any funeral services for him be kept simple. In keeping with her husband's request, Edie Adams made arrangements for Presbyterian services held at the Beverly Hills Community Presbyterian Church. The active pallbearers were Jack Lemmon, Frank Sinatra, Dean Martin, Billy Wilder, Mervyn Leroy, and Joe Mikolas, while Ernie's father, Andrew, and brother, Tom, served as honorary pallbearers. Among those in attendance were George Burns, Groucho Marx, Edward G. Robinson, Kirk Douglas, Jack Benny, James Stewart, Charlton Heston, Buster Keaton, and Milton Berle. While there was no typical Hollywood-type eulogy, the church's pastor paid tribute to Kovacs, adding that Ernie once summed up his life in two sentences: "I was born in Trenton, N. J. in 1919 to a Hungarian couple. I've been smoking cigars ever since."

Kovacs is buried in Forest Lawn-Hollywood Hills Cemetery in Los Angeles. His epitaph reads, "Nothing in moderation—We all loved him." Only one of Kovacs' three children survives, his eldest, Elisabeth (from his first marriage); Kippie, his second, died on July 28, 2001[69] at the age of 52 after a long illness and a lifetime of poor health. Keigh Lancaster, Kovacs' only grandchild, was born to Kippie and her husband, screenwriter Bill Lancaster (1947-1997) (son of actor Burt Lancaster). His only child with Edie Adams, Mia Susan, was killed May 8, 1982—also in an automobile accident; Mia and Kippie are buried close to their father; when Edie died in 2008, she was buried between Mia and Kippie.