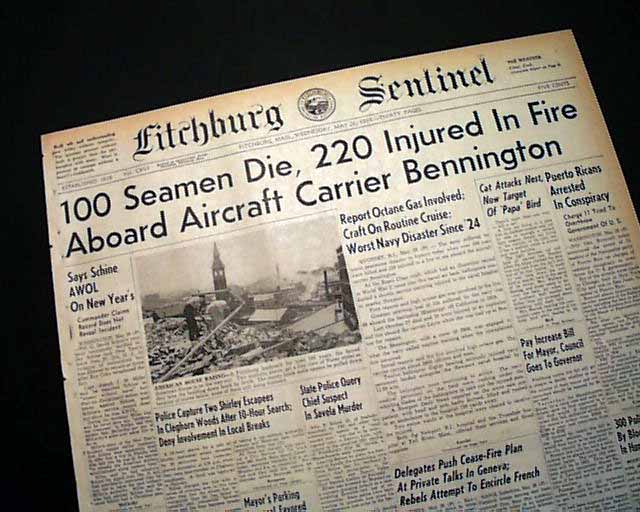 This 30 page newspaper has a nice two line banner headline on the front page: "100 Seamen Die, 220 Injured In Fire Aboard Aircraft Carrier Bennington" with subhead. (see)

Tells of the explosion disaster on board the USS Bennington in Narragansett Bay.

wikipedia notes: From 14 May 1953-27 May 1954, she operated along the eastern seaboard; made a midshipman cruise to Halifax, Nova Scotia; and a cruise in the Mediterranean. At 08:11 on 26 May 1954, while cruising off Narragansett Bay, the fluid in one of her catapults exploded, setting off a series of secondary explosions which killed 103 crewmen and injured 201 others. Bennington proceeded under her own power to Quonset Point, Rhode Island, to land her injured. This tragedy caused the U.S. Navy to switch from hydraulic catapults to steam catapults for launching aircraft.