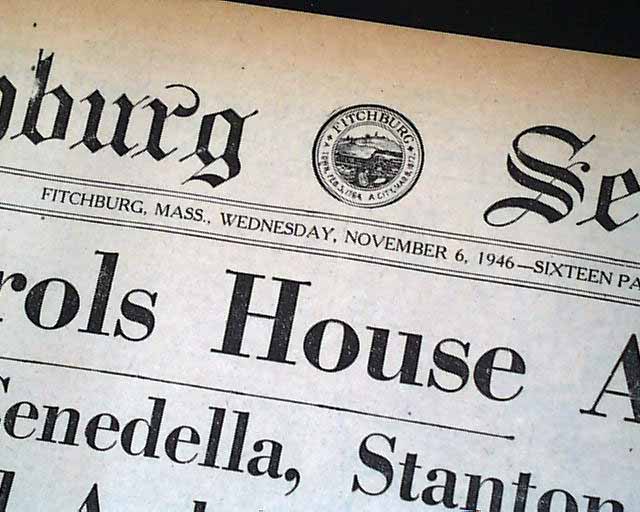 This16 page newspaper has various election headlines with a report which begins on the front page with the headline:

with subheads. This report continues on page 6 which ends with the text: "A new face in the Democratic delegation will be John F. Kennedy...."

This was the 1st political seat of the future U.S. President. Nice to have in a Massachusetts newspaper.

wikipedia notes: After World War II, Kennedy had considered the option of becoming a journalist before deciding to run for political office. Prior to the war, he had not strongly considered becoming a politician as a career, because his family, especially his father, had already pinned its political hopes on his elder brother. Joseph, however, was killed in World War II, giving John seniority. When in 1946 U.S. Representative James Michael Curley vacated his seat in an overwhelmingly Democratic district to become mayor of Boston, Kennedy ran for the seat, beating his Republican opponent by a large margin. He was a congressman for six years but had a mixed voting record, often diverging from President Harry S. Truman and the rest of the Democratic Party.