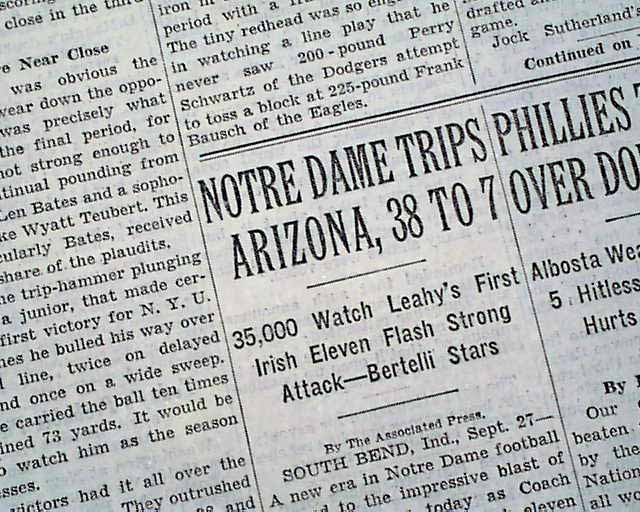 This 70+ page newspaper has one column headlines on the front page of the sport's section (inside): "NOTRE DAME TRIPS ARIZONA, 38 TO 7" and "35,000 Watch Leahy's First Irish Eleven Flash Strong Attack--Bertelli Stars".

Report continues on page 4 of the sport's section with lineup and stats. (see)

Tells of the very 1st game coached by Frank Leahy at Notre Dame. He would lead the Fighting Irish to 4 national championships during his tenure there.

wikipedia notes: Leahy went to his alma mater, Notre Dame, as head coach IN 1941. His impact was felt right away as the Irish posted an 8-0-1 mark. The following season, he caused an uproar when he junked Rockne's box formation and installed the T. After a 7-2-2 season in 1942, Leahy led Notre Dame to a national championship in 1943 despite losing the season finale against Great Lakes by a score of 19-14. He entered the Navy in 1944 and was discharged as a lieutenant. He returned to Notre Dame for the 1946 season in which Notre Dame won the national championship after playing rival Earl Blaik's Army team to a scoreless tie at Yankee Stadium in New York. National championships followed in 1947 and 1949, with only a 14-14 tie against USC in the season finale marring a perfect season in 1948 and a possible third "(and then a fourth)" consecutive national title. It was regarded by many as the most successful run in Notre Dame history and Leahy appeared to be well on his way of meeting his goal of ten consecutive seasons without a losing record. Then with most of the wartime talent gone from the scene, the Irish fell to 4-4-1 in 1950. Scholarships had been reduced from 33 to 18 per year in 1948 when other teams, tired of getting beaten year in and year out, began dropping Notre Dame from their schedules. Consequently the talent level had dropped off drastically.

Scholarships were increased afterwards, and the situation improved. Aided by freshman eligibility brought on by the Korean War, Notre Dame finished 7-2-1 in 1951 and 1952 while the 1953 squad, Leahy's last, posted a 9-0-1 docket. A controversial 14-14 tie against Iowa denied the Irish another potential national championship. There was some concern about Leahy's health when he collapsed from a pancreatic attack in the locker room during halftime of the 1953 Georgia Tech game. A priest allegedly gave Leahy the last rites of the Catholic Church when it was feared he was dying.

The controversy over the tie with Iowa stemmed from the fact that both of Notre Dame's touchdowns (one late in the first half and the other late in the game) came after a player had faked an injury. In both instances, Notre Dame had used up their allottment of time outs, and under normal circumstances, time would have expired in each half before they could run another play. Faking an injury was a widely-used ploy in football as a means of buying time, but in most cases there was no impact on the outcome of a game. In Notre Dame's case, they used this ruse not once but twice in the same game, and both times they managed to score touchdowns. A new rule was implemented the following year forbidding players from faking injuries, and many saw this as punishment directed at Notre Dame, who were branded as the "Fainting Irish."

Leahy resigned on January 31, 1954 with two years remaining on his contract. Supposedly he had been ordered to give up coaching by his doctors for the sake of his health, but he later revealed that he left because he felt he was no longer wanted. While at Notre Dame, Leahy had six undefeated seasons, four national championship teams and an unbeaten string of 39 games (37-0-2) in the late 1940s. He also coached four Heisman Trophy winners - Angelo Bertelli (1943); Johnny Lujack (1947); Leon Hart (1949) and John Lattner (1953) - and recruited a fifth, 1956 winner Paul Hornung. His overall record at Notre Dame was 87-11-9.

Like his former coach, Knute Rockne, Leahy believed that games were won in practice and had the reputation for being relentless. It is said that Leahy's teams never had a practice without hitting and that his quarterbacks would catch snaps every practice until their hands bled. His teams were always well conditioned and Leahy was merciless when it came to the toughness of his players.

In addition to his practices, Leahy coached a tough-nosed style of football during the games. Leahy's teams rarely kicked field goals when they were on the goal line because Notre Dame didn't kick field goals. Notre Dame was too tough to kick field goals. This philosophy backfired against Army in 1946, when the Irish drove all the way to the Cadets' 4-yard line and turned the ball over on downs. A field goal might have won the game.

Leahy was succeeded by Terry Brennan, ushering in a downward slide for Notre Dame's football fortunes for the next decade.

In 1949 he wrote a book on the T-formation, "Notre Dame Football T-Formation".

Leahy always referred to his players as his "lads."