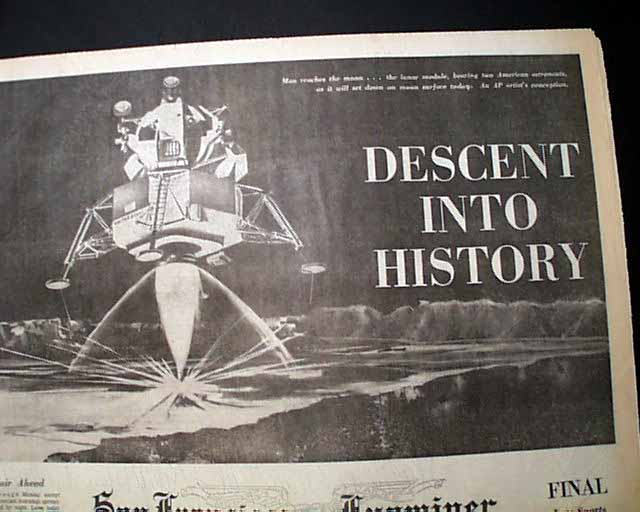 This 28 page, 1st section only newspaper has a four column headline on the front page:

with subhead: "Girl Dies; He Faces Arrest" with photos of the two. (see)

Also reporting on the Apollo 11 space flight that put the first man on the moon the very same day with related illustration. (see)

wikipedia notes: On July 18, 1969, Kopechne attended a party on Chappaquiddick Island, off the coast of Martha's Vineyard, Massachusetts, held in honor of the "Boiler Room Girls." This affectionate name was given to the six young women who had been vital to the late Robert Kennedy's presidential campaign and who had subsequently closed up his files and campaign office after his assassination.

Besides Kopechne, the other women, all single, were Susan Tannenbaum, Maryellen Lyons, Ann Lyons, Rosemary (Cricket) Keough, and Esther Newberg. The men in attendance, all married but present without their wives, were Ted Kennedy, Joe Gargan, U.S. Attorney Paul Markham, Charles Tretter, Raymond La Rosa, and John Crimmins. The festivity was held at Lawrence Cottage, rented for the occasion by Gargan, Kennedy's cousin and lawyer. The 12 attendees gathered at the cottage after two Kennedy boats raced in the Edgartown Regatta earlier in the day.

Kopechne left the party at 11:15 p.m. with Kennedy after he allegedly offered to drive her to catch the last ferry back to the Katama Shores Motor Inn in Edgartown where she was staying. (According to Kennedy, they left the party at 11:15 p.m. to catch the last ferry of the night -- at midnight.) Kennedy stated, on his way to the ferry crossing back to Edgartown, that he accidentally turned right onto Dike Road - a dirt road - instead of bearing sharply left on Main Street (Chappaquiddick Rd), which was a paved road. After proceeding one-half mile, he descended a hill and came upon a narrow bridge set obliquely to the unlit road. Kennedy drove the 1967 Oldsmobile Delmont 88 belonging to him, off the side of Dyke Bridge, and the car overturned into Poucha Pond, a fairly narrow tidal body of water. A Reader's Digest investigation estimated that the car was traveling at about 35 miles per hour when it left the bridge.

Kennedy extricated himself from the submerged car but Kopechne died. Kennedy said that he made several diving attempts to free her and, after exhausting himself, rested for fifteen minutes. He then walked some fifteen minutes, past several houses, back to the Lawrence Cottage where the party had been held. When Kennedy arrived back at the cottage, he saw the white Valiant his group had rented parked near the front door. The Senator testified that as he came up to the back of the vehicle, he saw Ray LaRosa. Kennedy made no mention of the accident to LaRosa, however, and instead told him to go get Joe Gargan, Senator Kennedy's cousin and lawyer, and another friend, former U.S. Attorney Paul Markham. Kennedy explained the situation, and although there was a working phone at the cottage, the trio allegedly drove to the scene of the accident to attempt a rescue. The group claimed that the tidal current was too strong and prevented them from reaching Kopechne.

Still, despite their failure to rescue Kopechne, Kennedy, Gargan, and Markham made no attempt to contact authorities. Instead, Kennedy was driven to the Ferry dock where he jumped into the water and swam the distance between Chappaquiddick and Marthas Vineyard Islands, some 500 feet, and returned to his room at the Shiretown Inn, in Edgartown. Gargan and Marken claimed Kennedy said he was heading to contact the authorities, and they returned to the cottage. A night clerk at the Shiretown Inn said he encountered Kennedy on the premises at 2:50 a.m. The next morning, Gargan, Markham, and several female co-workers of Kopechne took the first ferry back to Edgartown. At the Shiretown Inn, Kennedy was seen around the hotel smartly dressed and calmly conversing with other guests. By 9 a.m. Gargan, Markham, and Kennedy were on a ferry back to Chappaquiddick Island, purportedly to return to the cottage.

By this time, however, a fisherman had happened upon Kennedy's submerged vehicle and pulled it ashore[citation needed], rushing to a house a few yards away to notify the authorities at around 8 a.m. Police arrived by 8:20, and a diver was on the scene by 8:30, discovering Kopechne by 8:45. By this time, the car was identified as Senator Kennedy's. Those at the scene feared another Kennedy tragedy might have occurred, and a search for other possible victims ensued; however, at 9:30 Kennedy was spotted on a phone at the Chappaquiddick side of the ferry, where he was asked by authorities if he knew that a dead woman's body had been retrieved from his car. Kennedy initially denied any knowledge of this, but later acknowledged his involvement during questioning at the Edgartown police station, which he documented through a short, written statement about the previous night's trip to the ferry with Miss Kopechne. When questioned about the details, Kennedy refused to answer without his attorney being present.

Kennedy's statement already had problems, however.[neutrality disputed] The previous evening, Deputy Sheriff Christopher Look, on returning from duty in Edgartown, had seen what he believed to be Kennedy's black sedan driving erratically with a male and female passenger sometime around 12:40 a.m. The sedan failed to negotiate a sharp left turn on paved Chappaquiddick Road leading toward the ferry, the direction from which Deputy Look was returning home. Instead, the sedan continued straight and came to a dusty, sudden stop on the dirt cemetery driveway then locally called Cemetery Road (today Willet Lane). The deputy came to a stop and in his rear-view mirror noticed the sedan backing up, leading him to believe the driver needed directions. Look exited his vehicle and walked toward the sedan, and the sedan's reverse-taillights more closely illuminated him as it emerged from the dirt driveway. However, no sooner was Look's deputy uniform lit, according to Look, the sedan quickly turned to its right -- the opposite direction from the ferry -- and sped down Dike road, which is dirt. Dike is the road leading to the beach, and the intersection where this occurred was about a half mile from Dike Bridge, where the accident was later discovered. Deputy Look caught an L and two 7s bracketing the Massachusetts license plate number, which would closely match Kennedy's L-78207 Oldsmobile plate.

Kennedy avoided the press gathering outside the police station, quietly exiting to an unmarked car that took him to a privately hired plane at the airport nearby, which took him back to the Kennedy compound at Hyannisport. Likewise, guests of the party also quickly left for the mainland via the ferry long before the authorities concluded there had been a party at the Lawrence Cottage.

The incident carries a controversial dark-cloud for Kennedy because John Farrar, the diver who retrieved Kopechne's body early the following morning, stated Kopechne was in a position suggesting she had been breathing from a pocket of air trapped in the back-seat wheel well and had suffocated and not drowned, which implied that had Kennedy contacted authorities immediately, rescuers may have saved her life. However, since Kopechne's parents' lawyer, Joseph Flanagan, filed a petition barring an autopsy, the cause of death was never medically confirmed. When the car was recovered, all the doors were locked and three of the windows were either open or smashed in.

Kopechne's parents also claim that they learned of their daughter's death from Ted Kennedy before he reported his involvement to the authorities, and that they only learned he had been the driver through wire press releases some time later.[citation needed]

Kennedy ultimately received a deferred six-month sentence for leaving the scene of an accident. Kennedy defenders claim the legal case proved Kennedy was clear of guilt, whereas critics of the incident assert Kennedy got off lightly because of his family and political connections, and that many details were swept under the rug only to emerge later through journalistic efforts that suggested little effort was made to gather information detrimental to Kennedy.