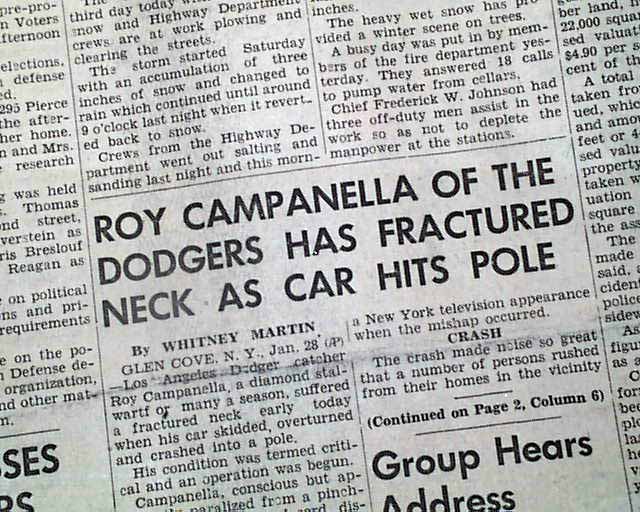 This 10 page newspaper has a two column headline on the front page: "ROY CAMPANELLA OF THE DODGERS HAS FRACTURED NECK AS CAR HITS POLE".

Nice to have on the front page for display. Other news of the day throughout.

wikipedia notes: Campanella lived in Glen Cove, New York, on the North Shore of Long Island, while owning a liquor store in Harlem which he also operated during the baseball off-season and between games. On January 28, 1958, after closing the store for the night, he began his drive to his home in Glen Cove. En route, traveling at about 30 m.p.h., his car (a rented 1957 Chevrolet sedan) hit a patch of ice, skidded into a telephone pole and overturned, breaking Campanella's neck. He fractured the fifth and sixth cervical vertebrae and compressed the spinal cord.

The accident left Campanella paralyzed from the shoulders down.[5] Through physical therapy, he eventually was able to gain substantial use of his arms and hands.[7] He was able to feed himself, shake hands, and gesture while speaking, but he would require a wheelchair for mobility for the remainder of his life.