Home > Perhaps the nicest Titanic report to be had ?
Click image to enlarge 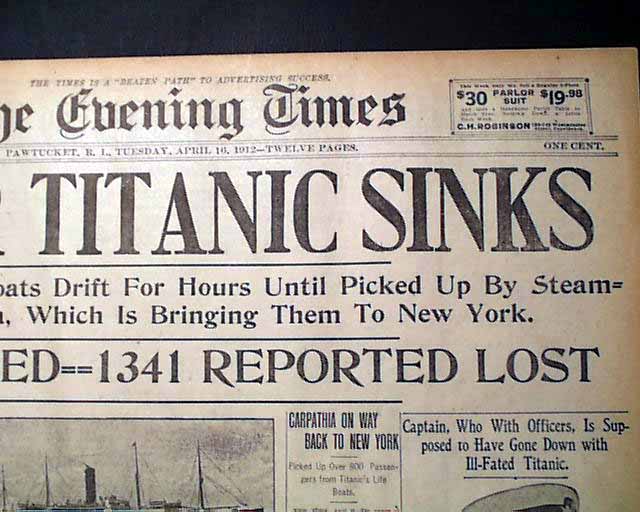 Perhaps the nicest Titanic report to be had ?


THE EVENING TIMES, Pawtucket, Rhode Island, April 16, 1912
We have sold many reports of the sinking of the Titanic over the last 32 years--many of which have been dramatic reports--but I'm not sure we've ever had a dramatic report which was in terrific condition.
See the photos for the front page and inside page reports.  The large & bold banner headline reads just as every collector would want in this newspaper: "LINER TITANIC SINKS" with many nice subheads as well including: "Passengers In Life Boats Drift For Hours Until Picked Up By Steamship Carpathia, Which Is Bringing Them to New York" "868 Rescued--1341 Reported Lost" and more (see photos).
The front page also features a photo of Captain Smith, headed: "Captain, Who With Officers, Is Supposed to Have Gone Down with Ill-Fated Titanic." and below him is a photo of the Titanic, captioned: "Captain Smith And the Titanic".
The other photos on the front page are of "Mrs. John Jacob Astor", "J. J. Astor", "Isidor Straus", and "W. T. Stead".
Additional reports are on pages 3 and 9, with the latter page having a rather large photo of the Titanic with headline: "LOST TITANIC VALUED AT $12,500,000 ON MAIDEN TRIP" with other heads including: "Titanic Regarded As Wonder of the Age" and "Icebergs So Near Sea Level That It Is Hard To See Them." and more.
The condition of this complete twelve page newspaper is excellent. Most issues of this vintage are browned & pulpish with various edge tears, margin chips and stains. This issue has almost no browning save for a slight bit at the margins, and has no margin tears to mention. There is just the slightest bit of wear to the lower right margin of the front leaf, otherwise the issue has very clean margins and is in great condition. There is a fold which runs down the first column but happened after printing and does not cause any text loss nor detract from readability or display. Very rarely are Titanic reports found in such excellent condition!
This issue could be the nicest Titanic report we have had the pleasure to offer, and a newspaper for the very best of collections.