Home > Back to Search Results > Group lot on the Daniel Sickles murder case... First use of the "insanity" plea...
Click image to enlarge 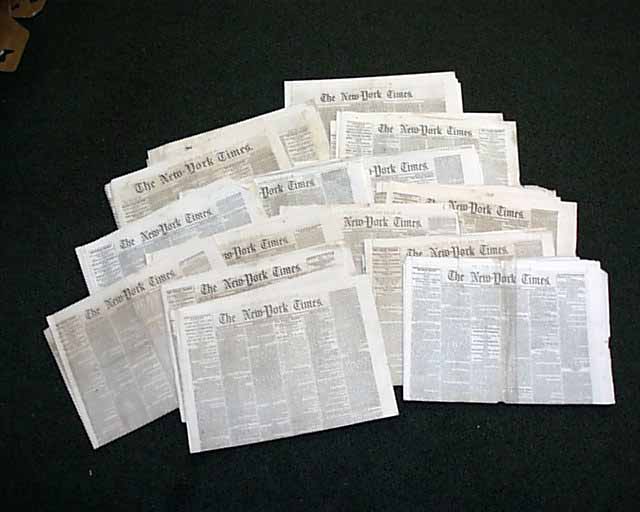 Group lot on the Daniel Sickles murder case... First use of the "insanity" plea...

Here is a collection of fifteen issues (15) of THE NEW YORK TIMES newspaper, all different dates from March 2 thru April 25, 1859 and each with front page coverage of: "The Sickles Tragedy", being the trial of Congressman Daniel Sickles for the murder of Philip Barton Key, son of Francis Scott Key. It created a national sensation because of the lurid details, as Sickles suspected Key of having an affair with his wife, and when caught persuing her he shot him at point blank range shouting, "You must die! You must die!".
Sickles' defense ultimately was that he could not be held responsible because he was driven insane by the knowledge his wife was sleeping with Phillip Key. This was the first use of the "insanity plea" for a murder case.
Each issue is complete in 8 pgs. with extensive text which begins in the top half of the front page of each issue. The March 2 issue has a wear hold at the very center & near the top, otherwise the other issues are in nice condition with some expected foxing. Each issue was never bound nor trimmed, as sold on the street.
A great opportunity for a wealth of content on this famous trial, in this very famous newspaper, whether for resale or a personal collection.