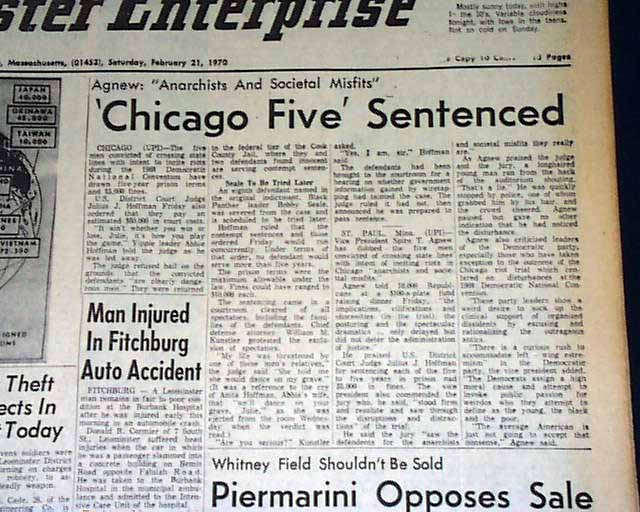 This 10 page newspaper has a four column headline on the front page: "Chicago Five Sentenced" with caption: "Agnew: 'Anarchists And Societal Misfits'". Other news of the day throughout. Small binding holes along the spine, otherwise in good condition.

Background Information: The Chicago Seven were seven (originally eight, at which point they were known as the Chicago Eight) defendants charged with conspiracy, inciting to riot, and other charges related to violent protests that took place in Chicago, Illinois on the occasion of the 1968 Democratic National Convention.

The convention, in late August, 1968, was the scene of massive demonstrations protesting the Vietnam War, which was in full swing. Thousands of people showed up with signs and banners, tie-dyed shirts, music, dancing, and poetry. A pig, "Pigasus the Immortal," was brought into the city to be "nominated" for President. At first it was a carnival atmosphere. The police were edgy. Some people responded to a night-time curfew announcement with rock-throwing. Police used tear gas, and struck people with batons. People were arrested. In the aftermath, a grand jury indicted eight demonstrators and eight police officers.

The original eight protester/defendants, indicted by the grand jury on March 20, 1969, were: Abbie Hoffman, Jerry Rubin, David Dellinger, Tom Hayden, Rennie Davis, John Froines, Lee Weiner, and Bobby Seale. The defense attorneys were William Kunstler and Leonard Weinglass of the Center for Constitutional Rights. The judge was Julius Hoffman. The prosecutors were Richard Schultz and Tom Foran. The trial began on September 24, 1969 and on October 9 the United States National Guard was called in for crowd control as demonstrations, the Days of Rage organized by the Weather Underground Organization, grew outside the courtroom.

Early in the course of the trial, Black Panther Party activist Bobby Seale hurled bitter attacks at Judge Hoffman in court, calling him a "fascist dog," a "pig," and a "racist," among other things. Seale had wanted the trial postponed so that his own attorney, Charles Garry, could represent him (Garry was about to undergo gallbladder surgery); the judge refused the postponement, and then refused to allow Seale to represent himself, leading to the verbal attacks on the judge by Seale. When Seale refused to be silenced, the judge ordered Seale bound and gagged in the courtroom, citing a precedent from the case of Illinois v. Allen, 397 U.S. 337 (1970). (This was alluded to in Graham Nash's song, "Chicago", which opened with: "Though your brother's bound and gagged, and they've chained him to a chair"). Ultimately Judge Hoffman severed Seale from the case and sentenced him to four years in prison for contempt.

The Chicago Eight then became the Chicago Seven, where the defendants, particularly Yippies Hoffman and Rubin, mocked courtroom decorum as the widely publicized trial itself became a focal point for a growing legion of protesters. One day, defendants Hoffman and Rubin appeared in court dressed in judicial robes. Hoffman blew kisses at the jury. The trial extended for months, with many celebrated figures from the American left and counterculture called to testify (including folk singers Phil Ochs, Judy Collins and Arlo Guthrie, writer Norman Mailer, LSD advocate Timothy Leary and Reverend Jesse Jackson).

I pointed out that it was in the best interests of the City to have us in Lincoln Park ten miles away from the Convention hall. I said we had no intention of marching on the Convention hall, that I didn't particularly think that politics in America could be changed by marches and rallies, that what we were presenting was an alternative life style, and we hoped that people of Chicago would come up, and mingle in Lincoln Park and see what we were about.

In the end, on February 18, 1970, all seven defendants were found not guilty on the conspiracy charges, two (Froines and Weiner) were acquitted completely, and five were convicted of crossing state lines with the intent of inciting a riot. These five were each sentenced to five years' imprisonment and fined $5,000 on February 20, 1970. At sentencing, Hoffman suggested the judge try LSD, and offered to set him up with a dealer he knew in Florida.

The convictions were all reversed on appeal by the United States Court of Appeals for the Seventh Circuit on November 21, 1972. The reasons for the reversal involved bias by the judge and his refusal to permit defense attorneys to question prospective jurors regarding cultural bias. The Justice Department decided not to re-try the case. During the trial, all the defendants and both defense attorneys had been cited for contempt and sentenced to jail, but those convictions were also overturned. The contempt charges were re-tried before a different judge, who found Dellinger, Rubin, Hoffman and Kunstler guilty of some of the charges, but decided not to sentence the defendants to jail or fines. source: wikipedia 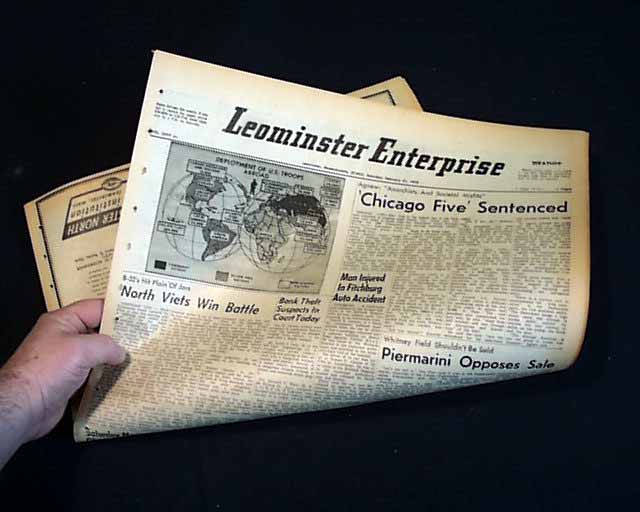 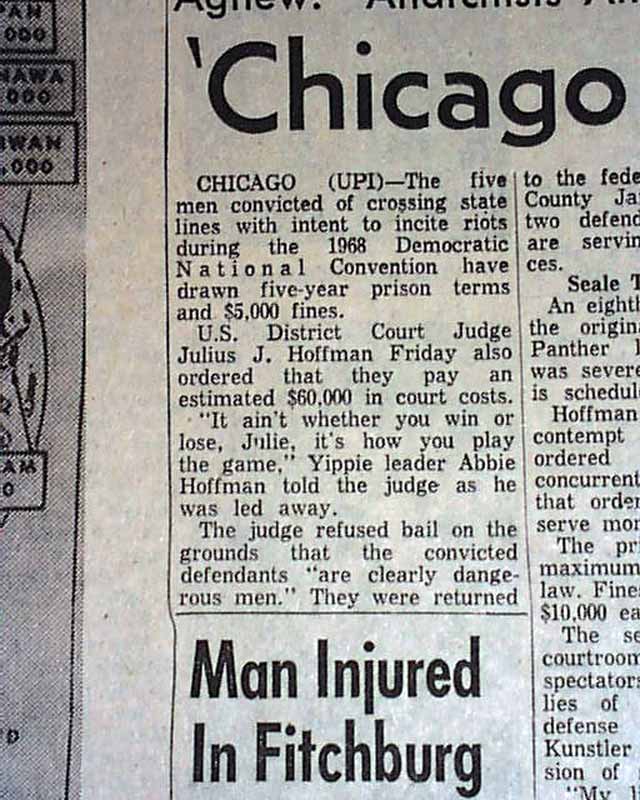 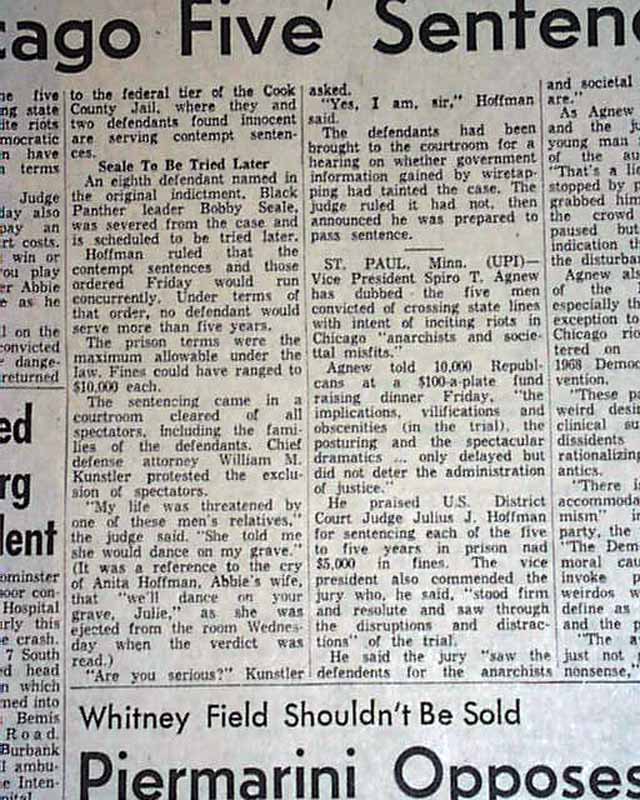