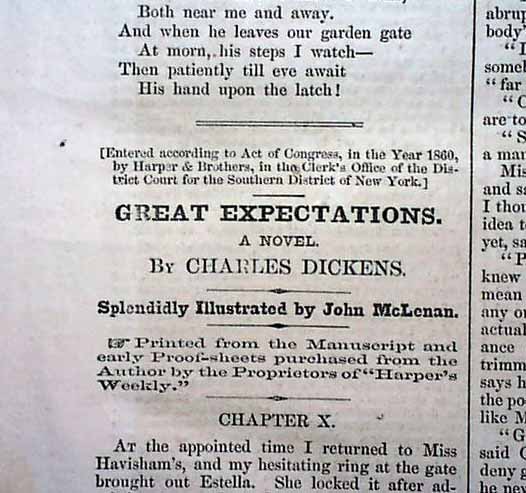 
HARPER'S WEEKLY, New York, January 5, 1861 through February 9, 1861. This is a six-issue set (part 2) of Harper's Weekly containing the Charles Dickens "Great Expectations" in serialization format. The set provides more than a 10% discount over purchasing the issues individually.

HARPER'S WEEKLY, Jan. 5, 1861 Full ftpg. is: 'The Georgia Delegation in Congress' showing 10 men. This ftpg., plus the doublepg. centerfold: 'Seeing the Old Year Out' are by Winslow Homer. Fullpg: 'New Year's Eve in the Country'.   This issue also contains a serialized portion of "Great Expectations" by Charles Dickens.   In addition, the 2nd installment of  "Dickens's Christmas Story - A MESSAGE FROM THE SEA" is also present, taking nearly 7 pages of text.

HARPER'S WEEKLY, Jan. 12, 1861 Much of ftpg. taken up with an illus. of 'Maj. Anderson, Commanding At Ft. Sumter' with a bio. Dramatic fullpg: 'The Battle of New Orleans, Fought Jan. 8, 1815' & 'Sketches of Ft. Moultrie' halfpg: 'Occupation of Castle Pickney by the Charleston Militia' 'Entry of Anderson's Command into Ft. Sumter on Christmas Night'.

HARPER'S WEEKLY, Jan. 26, 1861 Ftpg. shows: 'The Prayer at Sumter'. Dramatic fullpg: 'Firing on the 'Star of the West' from Morris Is.' Two more quarter-pg. illus. of Ft. Moultrie. Fullpg. showing: 'Ft. Sumter, Seen from the Rear' plus a fullpg. of the cannons inside Ft. Sumter'. Very fine fullpg. view of 'The City of Charleston, S.C.' would be very nice for display.

HARPER'S WEEKLY, Feb. 9, 1861 Great full ftpg. illus: 'The Seceding Alabama Delegation In Congress' shows all 9 men. Fine halfpg. illus: 'The City Of Montgomery, Ala.' and another great view of 'The City of Vicksburg, Miss.' A very significant issue.