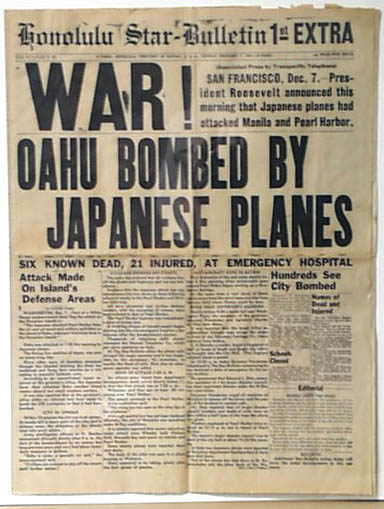 
HONOLULU STAR BULLETIN, 1st EXTRA, Dec. 7, 1941  See the photos for the terrific and historic headlines on the bombing of Pear Harbor. This is the famous "1st Extra" edition being the earliest of the four editions on Dec. 7 (we have the other rare editions as well--inquire). This issue contains the earliest printed source closest to the attack, and is filled with eyewitness accounts.  Huge & dramatic headlines on the front page: "WAR! OAHU BOMBED BY JAPANESE PLANES". Eight pages, never bound. There are some minor tears at margins and minimal wear at the central fold, in general very nice condition and one of the better condition issues of this newspaper we have sold in 30 years. One must be careful in buying this historic issue as 98% of those on the market, particularly eBay, are reprints with no collector value. Rest assured this is a genuine issue, and a cornerstone newspaper for any 20th century collection.