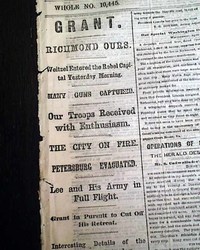 First column heads on the front page about the fall of Richmond: "GRANT" "Richmond Ours" "Weitzel Entered the Rebel Capital Yesterday Morning" "Many Guns Captured" "Our Troops Received with Enthusiasm" "The City On Fire" "Petersburg Evac
... See More 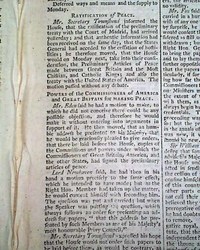 Historic Proclamation by the King formally ending the Revolutionary War...

Certainly the prime--and very historic--content takes over one-third of the back page, headed: "By the KING, A PROCLAMATION Declaring the Cessation of Arms, as well by sea as land, Agreed Upon Between his Majesty's the most Christian King,... See More