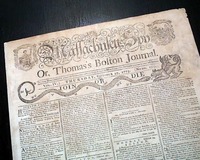 
THE MASSACHUSETTS SPY, Or Thomas's Boston Journal, October 27, 1774  It would be difficult to properly place both the scarcity and desirability of this newspaper in the confect of American history. This issue has the famous "Join Or Die" engraving stretching across the masthead.
In the same way that the famous "Dewey Defeats Truman" issue of the Chicago Tribune is com... See More 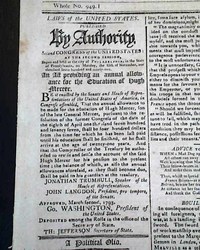 The front page begins with an Act of Congress "...providing an annual allowance for the Education of Hugh Mercer." which is signed in type by the President; Go. WASHINGTON, and also by: Th. Jefferson as Secretary of State.
Also on the ftpg: "Queen of France" references the ... See More 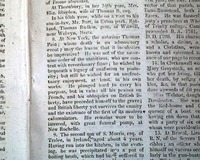 The obituary listing inside includes: "At New York, the notorious Thomas Pain [sic]; whose death is an admonitory event; may the lesson that it inculcates be impressive..." & more. The opposing page has: "In Guppendorff, aged 76, Joseph Haydn, the celebrated composer... ju... See More 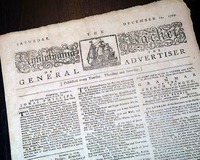 
THE PENNSYLVANIA PACKET OR THE GENERAL ADVERTISER, Philadelphia, Dec. 11, 1779

This newspaper features one of the most ornate and decorative mastheads of the Revolutionary War, the words "Pennsylvania Packet" so frilly that it can be difficult to read.
Most of page 2 is taken up with; "An Act for Vesting the Est... See More 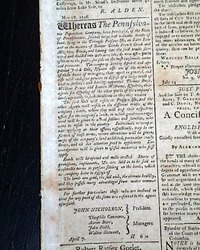 
THE HERALD; A GAZETTE FOR THE COUNTRY, New York, July 23, 1796  Page 3 has nearly half a column headed: "Thomas Paine" concerning a pamphlet he wrote on: "...the Decline and Fall of the English System of Finance...". A smaller article mentions Hamilton.
The front page has an ad placed by the "Pennsylvania Population Company" concerning the sale of large acreage ... See More 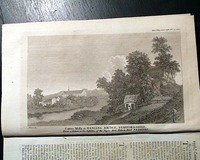 Item #673430
THE GENTLEMAN'S MAGAZINE, London, September, 1796
Under "Review of New Publications" is: "Observations on Mr. Paine's Pamphlet, entitled, 'The Decline and Fall of the English System of Finance'...". Further on is a letter signed: Horatio Nelson headed: "Vessels of War & Transports Taken by the Squadron under the command of Commodore Horatio Nelso... See More 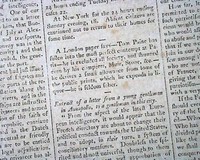 
FEDERAL GAZETTE & BALTIMORE DAILY ADVERTISER, Oct. 18, 1798  Page 3 has an interesting report: "A London paper says---Tom Paine has fallen into the most perfect contempt at Paris--he is excluded all society and shunned even by his compeers...he derives a small allowance from some of the public prints, which he expends in liquor--he is seldom sober."
Four pages, handsome masthea... See More 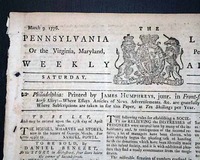 This was a decidedly Tory newspaper, supportive of the British efforts in America. This newspaper ended publication in June, 1778 when the British evacuated the city.
Over half of the front page is taken up with: "The following rules... See More 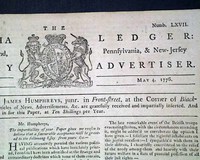