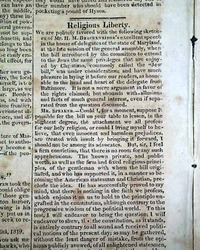 A fine pair of issues on the passage of the Maryland "Jew Bill".
May 29, 1819 issue: Certainly the best content is full text of the speech presented by of H.M. Brackenridge in the Maryland House of Delegates when the Jew ... See More 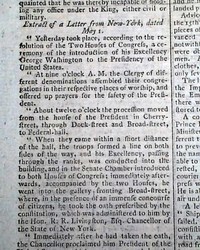 Certainly one of the more desirable events to have in a period newspaper is the first inauguration of George Washington. American issues with such content are virtually unobtainable today, and reports in any newspapers worldwide are extremely uncommon.
Here is a nice report of t... See More 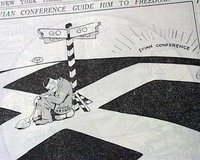 The top of an inside page (E-3) has a very notable political cartoon concerning the plight of Jewish refugees trying to flee Nazi Germany, notable enough that it is a feature display in the National Holocaust Museum in Washington, D.C.
This cartoon was created in anticipation... See More 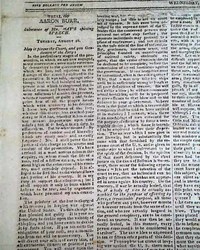 The back page has a very lengthy: "Proposals...For Publishing LEWIS and CLARK'S Tour to the Pacific Ocean, through the Interior of the Continent of North America..." noting the details that will be in "Volume First" as well as "Volume Second". And this is fol... See More 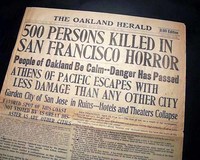 A quite rare newspaper, as not only is this not the more famous (and more common) San Francisco CALL-CHRONICLE-EXAMINER newspaper of April 19 but it is a day earlier yet equally as dramatic. Remember that Oakland is just across the bay from San Francisco.
The bold, ... See More 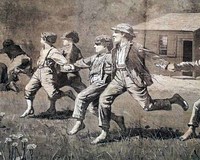 Certainly the prime feature of this issue is the much desired Winslow Homer doublepage centerfold: "Snap the Whip". As the photos show, this print is in very nice condition.
Front page features a 1/2 page illustration entitled: "The New Sc... See More 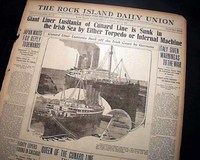 Graphic issue on the sinking of the Lusitania...

A very nice & graphic first report of the sinking of the Lusitania, with a 2-line banner headline: "Giant Liner Lusitania of Cunard Line is Sunk in the Irish Sea by Either Torpedo or Infernal Machine". Also a rather large photo headed: "Cunard ... See More 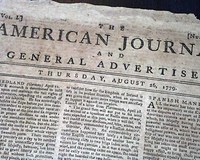 Latest war news in a rare newspaper from the Revolutionary War... 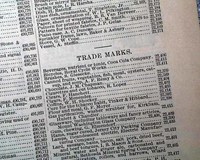 See the photo for the historic--yet inconspicuous--listing of Coca Cola receiving its trade mark, the very first in the list of many in this issue. The listing reads: "Beverages, nutrient or tonic, Coca Cola Company....22,406" the number being the patent number... See More